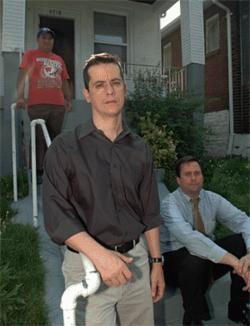 Jennifer Silverberg
Sleuthing from attorneys Gustavo Arango (left) and Ken Schmitt led to a trio of real estate brokers' indictments. One of those brokers has now been sentenced to prison.
Christian Joel Juan, one of a trio of real-estate brokers at the center of a housing scam targeting his fellow Spanish speakers, has been sentenced to prison for his role in the case.

Juan, a 31-year-old St. Louis man, was sentenced to one year plus one day in prison and ordered to pay $127,000 in restitution to the U.S. Department of Housing and Urban Development. He pleaded guilty in federal court to preparing phony loan documents and other financial documents back in January, but wasn't sentenced 'til last week.

The RFT's Chad Garrison wrote about the scam and the fearless lawyers who first uncovered it in a June 2006 feature story. It wasn't until four years later -- in June 2010 -- that indictments were issued against Juan and his co-conspirators, A.J. Adewunmi and Denisse Olmos.

As Garrison's story details, the trio falsified tax records so that unwitting buyers could buy more expensive homes than they could actually afford. Unbeknownst to the homebuyers, too, many of the homes were owned by a company controlled by Adewunmi -- and their closing costs included incredible markup. In one case, that meant a $46,781 commission on a $103,000 sale.

The brokers targeted buyers who spoke little English and were forced to rely on Juan and Olmos for advice and assistance.

It took sleuthing from attorneys Gustavo Arango and Ken Schmitt -- who were approached by a local Hispanic woman who was upset that she'd paid far more for her home than she'd been told -- to unravel the scam and bring the fraud to light.