"The Most Perfect Player Who Ever Did Live" 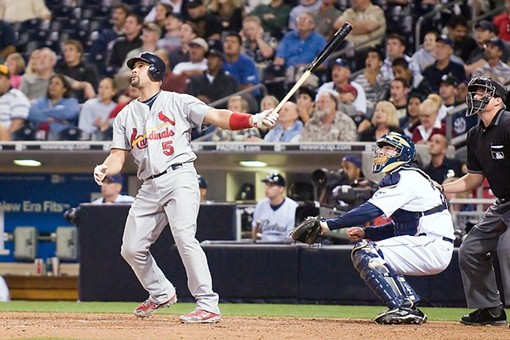 Wikimedia Commons
If you haven't already read Joe Posnaski and Bill James' Sports Illustrated cover story from last week on Albert Pujols, well, what else are you doing on a Monday morning. Working?
In what was probably the best piece of writing/analysis to come out of All-Star week, James makes the claim (then does his best to debunk it) that Pujols is, at this point in his career, the most perfect player in baseball history--statistically speaking, of course.
Highlights include this:

There are so few players who compare to Pujols from the start of a career that I thought we could modify our criteria just a bit and 1) look for players who had nine consecutive seasons as good as Pujols's at any point in their careers and 2) not insist that those nine seasons be as good as Albert's weakest season, just somewhere near that standard.

Even applying that looser standard, I find only 19 players in history who have had comparable strings of nine consecutive years. All 19 of those players are Hall of Famers with the exceptions of Barry Bonds, Pete Rose and Manny Ramirez.

[Hank] Aaron is the gold standard when it comes to consistency. Pujols, though, is gaining. And that seems to be what drives him: to be great every year. He has never batted lower than .314. Never hit fewer than 32 homers. Never driven in fewer than 103 runs. His career low on-base percentage is .394--that's his low--and to give you an idea about that, Cal Ripken Jr., Ryne Sandberg, Ernie Banks, Lou Brock and Jim Rice never once had an on-base percentage that high.

If you haven't sipped the Pujols Kool-Aid already, you will now. Consider it a must-read.
© 2023 Riverfront Times