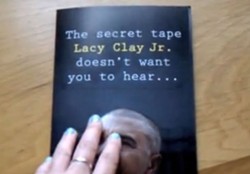 Novelty, thy name is Carnahan.
Representative Russ Carnahan, in the increasingly heated battle against Representative Lacy Clay, has just released a talking mailer to his constituents, calling out Clay for his remarks about PayDay Loans.

Right, a talking mailer. Like one of those singing birthday cards.

Except this one yells, "HE SAID WHAT!" when you open the flap.

A similar, more primitive ad went out in 2010 in Delaware, when a union portrayed Christine O'Donnell as a witch by sounding a devious cackle when the ad was opened. The Carnahan piece is the first ad of its kind in Missouri.

Said mailer features an edited clip of a speech Clay gave at a 2008 Association of Progressive Rental Organizations Convention suggesting that he is very supportive of the rent-to-own industry. About 15,000 voters in the district will receive the mailer, a few more thousand will get the same info sans talking chip (BORING). The same information is being disseminated on a website called PayDayClay.com.

In case you missed it:

Woman: He said what!

Clay: And one of the things I'm most proud of is our success in advancing the, uh, the vital interests of the rent-to-own industry. ... I will always do my best to protect what really matters to you.

Woman: Protect the rent-to-own industry? Seriously? He must've hauled in some big money from that.

Regardless of one's politics, the format is obviously kind of fun and has done well for candidates in other states.

Throwing this out there: Could someone with more time/less time/more smarts/less smarts than us please put together a ventriloquist act using the mailer, a la Job from "Arrested Development"? We will buy you infinity beers*.