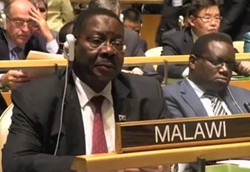 A former Washington University law professor was jailed earlier this month in Malawi after he and ten others were charged with trying to overthrow the current presidential administration.

A. Peter Mutharika was a law professor for 39 years in St. Louis before he returned to his native Malawi in 2011 to help his older brother, President Bingu wa Mutharika, in his final presidential term. The younger Mutharika was favored to succeed his brother in the 2014 elections.

Those plans were thrown into turmoil in April of 2012, when President Mutharika suddenly died of a heart attack and his vice president took his place.

Mutharika taught international law and authored the book Foreign Investment Security in Sub-Saharan Africa: An Agenda for the 21st Century. He was named the Charles Nagel Professor of International and Comparative Law in 2008. The school's Christophine G. Mutharika International Law Award is named after Mutharika's late wife.

While living in St. Louis, Mutharika continued to be involved in Malawian politics, advising his brother during his campaigns and helping to build his cabinet.

President Mutharika selected Joyce Banda as his running mate in Malawi's 2009 presidential elections, but the two had a falling out and Mutharika booted her from his political party. Some report that this is because she refused to agree to step aside for the 2014 elections and allow Peter Mutharika to succeed his brother. Despite the rift, Banda refused to resign, and according to the UK's Guardian, was stripped of most of her power, allowing Peter Mutharika to act as a "de facto" vice president.

After Bingu wa Mutharika collapsed in April of 2012, his condition was withheld prompting concerns that the administration was trying to find a way to prevent Banda from taking office. But after news of the death was made public, Banda was inaugurated, becoming the country's first female president.

Peter Mutharika was arrested on March 11 along with ten other government officials following the release of an investigative report that purportedly found evidence of a plot to prevent Banda from becoming president in the days following Bingu wa's death. One of the schemes allegedly called for the country's army commander to "just take over" in a coup, but he refused.

According to the BBC, Mutharika's arrest sparked protests and violence. Below is a Malawian news clip with footage of the arrest and underneath that, a clip that claims to show protesters reacting angrily to the arrests:

Mutharika made bail and is currently free and on the campaign trail for the 2014 elections. He's been charged with perjury and treason.

Daily RFT left a message with the Washinton University School of Law and sent messages to Mutharika's email address -- we'll update as we learn more.

Peter Mutharika retired from Washington University School of Law, effective July 1, 2011. We do not have any details on his current status in Malawi.

A grateful hat tip to Jack Newsham, who first wrote about Mutharika for the Yale Daily News.