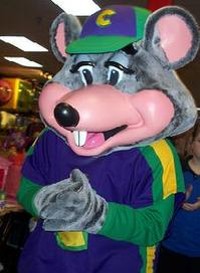 flickr.com/photos/twofivethreetwo
What the eff is going on with all the Chuck E. Cheese mayhem across the Midwest in the last couple weeks?

Exhibit A: the brawl that broke out Saturday night at the Chuck E. Cheese franchise near South County Mall. This was between adults, mind you. Even celeb gossip queen Perez Hilton has blogged about it. According to KMOV Channel 4's web story, "Police said they've had similar issues in the past at this restaurant. (They've also had an alleged boob-groping incident that we covered).

Exhibit B: on Sunday night, shots were fired and one person hospitalized at a franchise in Toledo, Ohio. Here's the story.

Exhibit C: last week, a surveillance video from a Chuck E. Cheese in Indianapolis shows a lady apparently prodding a little girl to snatch a purse from a booth. Click here for the video and the story.

Exhibit D: on Feb. 13, four people got charged for a fistfight in a Memphis, Tennessee franchise. A local news web site quoted a police report as saying "The customers and children began panicking and fleeing the scene to avoid getting involved."

All this is, apparently, not unheard of. The Wall Street Journal ran a piece about two years ago concerning violence at Chuck E. Cheese franchises, the sub-head of which was: "Kid-Centric Pizza Parlors Become Stage for Adult Bad Behavior, as Mama-Bear Instincts Kick In and Fights Break Out."

Blacks are going to put them out of business by scaring off the decent customers who don't want their kids to wind up in the middle of a ghetto rumble.

Daily RFT just wants to know: between shootings, theft and racism, where exactly can "a kid be a kid" these days?
© 2023 Riverfront Times