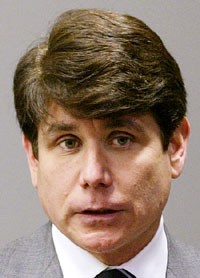 Our long, national bad-hair day is over.

This afternoon a federal jury in Chicago convicted former Illinois Governor Rod Blagojevich of 17 counts of wire fraud, attempted extortion, bribery, extortion conspiracy and bribery conspiracy during his time in office, including a plot to sell the U.S. Senate seat left vacant by Barack Obama.

The jury of 11 women and one man deliberated for 10 days and could not reach a consensus on just  three of the 20 counts dealing with bribery and extortion. Blagojevich said after the trial that he was "stunned" by the verdict. It's not clear at this point whether he'll appeal.

Last year a jury deadlocked after two weeks of deliberation on 24 charges -- convicting him only of lying to investigators. Blagojevich could spend decades behind bars for the convictions today. In the meantime, he's free until sentencing.

Blagojevich is the fourth Illinois governor in the past five decades to be convicted of crimes.