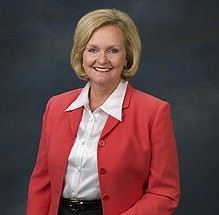 An interesting political article in today's New York Times pinpoints incumbent Sen. Claire McCaskill as a potential casualty this November if President Obama continues to campaign on an anti-Congress platform.

Experts say the oft-deadlocked Congress of last year is a fair target for President Obama, who lately has ridiculed lawmakers for throwing roadblocks in front of his initiatives. Obama has aimed his assaults at both Congressional chambers, and his prime punching bags, not unsurprisingly, have been Republicans. Recent polls suggest that Obama's strategy is resonating with voters.

But Democrat Congressmen have not eluded the critiques. And for McCaskill, a moderate Democrat in a state that recently turned from purple to red, Obama's strategy portends a tougher battle in an already-challenging race against her eventual Republican challenger -- be it U.S. Rep. Todd Akin, former State Treasurer Sarah Steelman or another candidate.

It's somewhat ironic that McCaskill could become collateral damage to Obama's anti-Congress campaign; during the 2008 election, McCaskill emerged as one of then-candidate Obama's fiercest loyalists. The senator from Columbia was a spokeswoman of sorts in the failed Democratic effort to swing Missouri into Obama's favor, and the two politicians have since remained close friends.

The Times article opens up by citing a recent tweet from Texas Sen. John Cornyn, the chairman of the National Republican Senatorial Committee: "If POTUS runs 'against Congress' how does he explain D controlled Senate?"

It then quotes Democratic Rep. Nancy Pelosi, the minority leader of the House, who last Sunday on CNN's "State of the Union" said: "I think he should run against this do-nothing Congress. For the past year there's been very little -- there has been a missed opportunity for building the infrastructure of America, making it in America with manufacturing initiatives for our country."

The hope, though, for incumbent Democrats like McCaskill and Montana Sen. Jon Tester -- at least according to the Times analysis -- is that many U.S. voters do not appear to know that Democrats currently control the Senate and might construe any attack on the Senate as an attack on the GOP at large. Citing a Pew Research Center poll last year, the Times reported:

"43 percent of respondents knew correctly that Republicans controlled the House. But another 21 percent credited Republicans with running both the House and Senate, and 15 percent had only the senate in Republican hands."