Maybe He Just Forgot Which Manny He Is?

Look, I've said it before, and I'll say it again: the Blues aren't going to win much of anything until they find some consistent, halfway good goal-tending.
I'm not sure what was going on exactly with Manny Legace last night against the Detroit Red Wings, but whatever it was, it wasn't good.

The Blues goalie let in three goals on eight shots before head coach Andy Murray pulled him to bring in the Blues' suddenly first-string goalie, Chris Mason. Maybe Legace, a former Red Wing, forgot which team he was on?

Maybe if Manny were a baseball player, that would have been a pretty good performance. Hey, 3-8 would be a pretty solid doubleheader, especially if you could throw a walk in there. It would be a decent day in the NBA. It would even be a solid day in the NFL for a quarterback.

Sadly, Mr. Legace doesn't play any of those other sports. He plays hockey. And in hockey, three goals in eight shots gets you a one-way ticket to Palookaville. (You know, it's really a shame the word "palooka" has mostly disappeared from our lexicon. I love that word.)
It was pretty exciting to see Patrik Berglund and T.J. Oshie both score, especially seeing as how I was just boosting them not too long ago. Hell, even Barrett Jackman, a.k.a. the Defenseman Time Forgot, managed to find his way into a goal. But once again, you see what happens when the goal-tending sucks.
click to enlarge 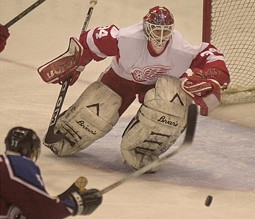 hockeygoalies.org
Legace from his days as a goalie who won games for Detroit while actually weating a Red Wings sweater
I don't know, maybe Manny is still hurt. If that's the case, though, the Blues need to get him on the DL and get the Blues' second-string tallboy, goalie Ben Bishop back up here posthaste. If he's healthy, then I don't know what else to do.

Do goalies ever just lose their shit the way closers seem to at the end of their careers? Either way, Manny now finds himself with an .885 save percentage, which ranks 42nd among NHL goalies who have enough minutes to qualify. Personally, I don't much look forward to seeing him between the pipes any time soon.
On the upside, at least Manny didn't end up taking the loss. That particular honor went to  Mason, who gave up one too many goals in the shootout. Fair, huh?
© 2023 Riverfront Times