No One in St. Louis Knows How to Spell "Zach Galifianakis"

YouTube
This is how.
Yesterday, the city was declared "Will and Zach Day" in honor of an appearance in Kiener Plaza made by actors Will Ferrell and Zach Galifianakis.

Apparently, no one in St. Louis knows.

Now, let's be straight. Typos happen. Until five minutes ago, I had no idea how to spell it either. It is a thousand vowels long. But several local media outlets managed to screw up the star's name in headlines celebrating the comic duo's stop to promote their new movie "The Campaign."

It's not just that complicated surname, either. Some people, including Mayor Slay, even crumbled under the spelling pressure and got "Zach" wrong.

(Note the typo in the body as well.) 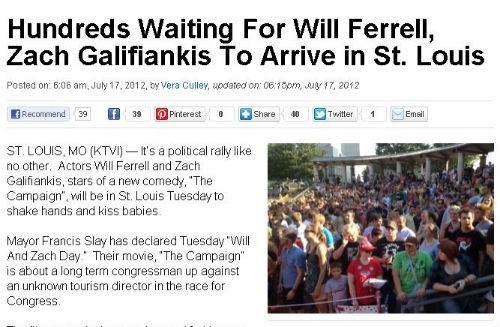 Rarely has there been such staff lobbying to deliver a proclamation on my behalf. #willandzacday #fgs

It should be said, however, that both "Zach" and "Galifianakis" are spelled perfectly (twice!) in Mayor Slay's official proclamation (read it here).

Again, tough name! Really tough name. I write this at great personal peril since, yes, I also commit typos. But it seems like everyone collectively didn't even try on this one.

Check out the actors' appearance and remarks below. (And the YouTube auteur spells Zach's last name right.)