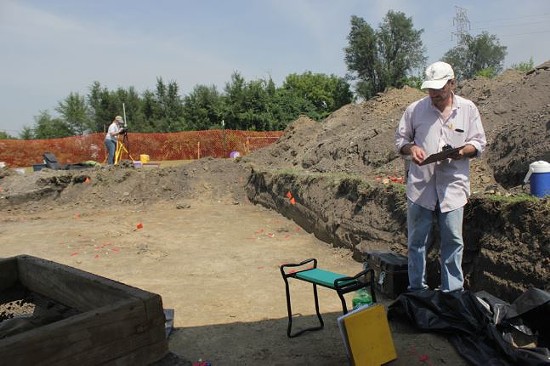 Danny Wicentowski
Joseph Galloy and a team of archaeologists are digging into Brooklyn, Illinois this week.

Brooklyn, Illinois has two things going for it: History and strip clubs. Even with a population of just 650, the village is arguably the Sin City of the Metro East.

Yet, just a few blocks away from the neon fleshpots on South 3rd Street, the other side of Brooklyn is coming to life. On the corner of Madison and South 6th streets, a team of state archaeologists are digging for evidence of the home owned by Priscilla "Mother" Baltimore, a former slave who founded the settlement in 1829. Not only did Baltimore become a well-known abolitionist who sheltered runaway slaves in the home that the archaeologists are searching for, the town she founded ended up becoming the first in the nation to be incorporated with a black-majority population.

"People still venerate her, they see her as the founding mother of the town," says Miranda Yancey-Bailey, a research archaeologist with the Illinois State Archaeological Survey.

Backhoes and heavy earth-moving equipment arrived in Brooklyn last Tuesday, setting up shop on a vacant lot that borders a middle school playground and faces a block of residential homes. After stripping two-and-a-half feet of top soil and earth, the machines exposed the original surface of what archaeologist think could be the historic home where Baltimore lived in 1851. Tarps cover portions of the exposed earth, and small flags, nails and lengths of string mark the locations of long-gone fence posts, outhouses and sub-floor cellars.

"There weren't that many black towns founded in the 19th century, and this is really the only one that's left as a sizable community," says Joe Galloy, research coordinator of the American Bottom Field Station in Wood River and a member of the Illinois State Archaeological Survey.

So far, Galloy and his small team of archeologists and surveyors have uncovered plates, bottles, shards of glass and buttons -- but these only date back to the 1870s. They've also found evidence of multiple homes on this same lot, each built on top of the ruins of the last.

"It would have been a very small house," he says. "It wouldn't have had any sort of indoor plumbing. For water, she would have possibly had cistern to catch rain water." He motions toward one of the marked-off sections of dirt. "We have a feature that might represent a cistern underneath this tarp here."

Image courtesy of ITARP
Priscilla "Mother" Baltimore, shown here in an undated photo, is believed to have founded Brooklyn, Illinois around 1830.

The larger goal, says Galloy, is to uncover enough evidence to place the village in the National Register of Historic Places. Much of that needed evidence traces back to the somewhat mythical life of Baltimore, who fled St. Louis in 1829 with a group of eleven black families and established a settlement on the opposite bank of the Mississippi. Around 1840, she moved to Brooklyn and later built a home there.

Researcher Yancey-Bailey dug into old divorce documents, newspaper clippings and property records to find traces of Baltimore, which is how she discovered the possible location of Baltimore's home on South Sixth Street and Madison. But much of what we know of Baltimore's life is apocryphal, passed down in oral histories or gleaned from tax and insurance records.

Here's a little of what is known of Baltimore: She was born around 1800 in Kentucky, the daughter an enslaved black woman and her white owner. He sold Baltimore as a young child, and she eventually landed in St. Louis, where she was bought by a missionary who allowed her to buy her own freedom. (Baltimore later bought her mother's freedom and brought her to St. Louis.)

A collection of "Free Negro Bonds" stored in the Missouri History Museum Research Center shows a "Pricilla Baltimore" paid $500 to the state of Missouri in 1861, though she had already bought her freedom in St. Louis decades prior. The bond lists her as a "Washer."

"She was such an inspirational person, she was taking in orphan children, and even after the end of the Civil War she was a part of different religious and social organizations that were formed to help freed slaves that were coming to the north," says Yancey-Bailey. "Brooklyn was also known as a hotbed of underground railroad activity. We don't have any specific records linking to Priscilla Baltimore, but her abolitionist activities would have been at a height during her time in Brooklyn."

In order to put Brooklyn in serious contention for the national register, Galloy needs to establish a much stronger link between present-day Brooklyn and its history as a haven for freed blacks, escaped slaves and the burgeoning African Methodist Church in the mid-19th century. Finding artifacts of Baltimore's life would provide that very link, but the challenge is steep. In Brooklyn today, there's nothing visibly standing that dates back to the 1850s. A nearby AME Church is housed in a structure built in 1873, but that alone won't cut it.

"A lot of times you'll find kitchen waste, household waste. That is a lot of what archaeologists dig up. We have pieces of coal from heating a house, but what we're looking for is artifacts that date to the right time period," says Galloy.

He and the team will be digging here one more week. They're still hoping to find those elusive bits of glass or ceramic that would prove Baltimore's house once stood here. "We probably won't find a locket with her name in it," Galloy adds, laughing. "We just keep digging."