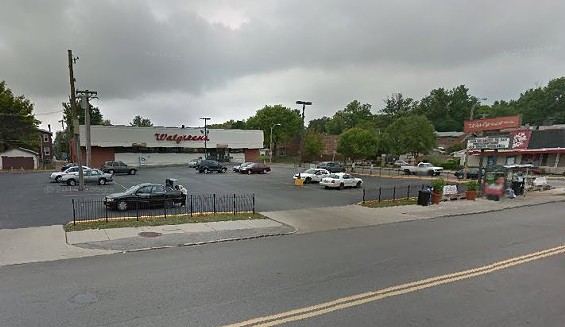 Google Maps
The Walgreens where the store owner shot the would-be robber.

A convenience-store owner shot and injured a would-be robber carrying a fake gun inside a south-city Walgreens after chasing him out of his own store.

The suspected robber -- identified by St. Louis police as David Cotner, 31, of the 1200 block of Wilmington Avenue -- was charged Wednesday with two counts of first-degree robbery, armed criminal action and physically taking property from a victim.

Just before 8 a.m., Cotner tried to rob Kaiser's Grand Mart, at 5508 South Grand Boulevard, by giving an employee a note announcing the robbery. Police said he did not show or say he had a weapon.

But the robbery went awry when the gutsy shop owner intervened, sending Cotner fleeing from the store. While his employees called police, the store owner got in his car and tailed Cotner to the Walgreens less than half a mile south, at 5550 South Grand Boulevard.

When Cotner announced another robbery at the Walgreens, the store owner ordered him to get down on the ground. According to what the store owner later told police, Cotner pointed a firearm at him, so he fired his gun twice at Cotner, striking him in the upper shoulder.

Cotner's gun was fake, police said. His injury was not life-threatening.