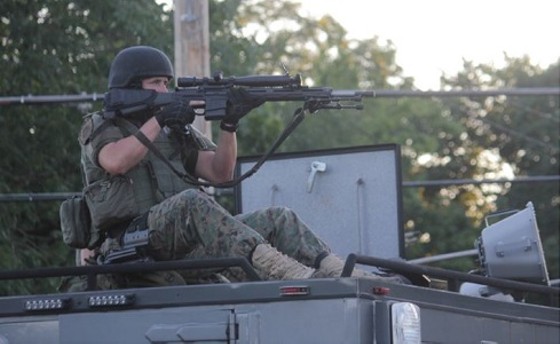 UPDATE: 3:30 p.m.: Governor Jay Nixon announced the Missouri State Highway Patrol will take control from the St. Louis County Police Department and lead police response in Ferguson. Nixon says the shift in oversight does not affect the investigation into the death of Michael Brown, the unarmed eighteen-year-old whose shooting death by a Ferguson Police officer launched days of violence and chaos.

"I grew up here," Johnson told reporters. "This is currently my community and my home...I understand the anger and fear of the citizens of Ferguson, and our officers will respect both of those."

Johnson says Ferguson can expect "a different approach" tonight, starting with him walking to the QuikTrip tonight to talk to demonstrators.

"There are too many questions that have not been answered, that need an explanation," Dooley said. People in the community "need to feel they are part of the solution."

Slay offered two police officers -- Chief Sam Dotson and Major Ronnie Robinson -- as advisers to the highway patrol as they take over command, adding he hoped for a "clearer, safer and shorter" tenure for the riot police serving in Ferguson this week.

UPDATE: 12:30 p.m. Sources tell Daily RFT that a new potential course of action is for St. Louis County Police to remain in Ferguson, but for command to be handed to the Missouri State Highway Patrol. We'll update when/if we get confirmation on that.

UPDATE: 11:45 a.m. At a press conference, Governor Jay Nixon would not confirm or deny a change in command, saying only there will be an "operational shift." More below.

After a fourth night of unrest in Ferguson, a massive police presence and arrests of journalists and prominent local figures, rumors are trickling in that the St. Louis County police and Chief Jon Belmar may be removed from command of operations in Ferguson.

The city of St. Louis spoke directly to the White House last night about the situation. Sources tell Daily RFT that Governor Jay Nixon's office and local law enforcement have been speaking on how to better handle operations. Points of discussion were treatment of journalists, and the use of snipers and other heavy artillery.

After a Ferguson police officer shot and killed eighteen-year-old Michael Brown, the Ferguson Police Department almost immediately called for help from St. Louis County police. The county assumed command of the investigation and of ground operations. Over the last several days as many as 40 other jurisdictions have sent officers to assist Ferguson and county police, including the city of St. Louis, the state police, the Missouri Highway Patrol and a host of other small municipalities.

A source told Daily RFT that over the past four days, the leaders from various law-enforcement departments are in regular communication about strategy, but he/she made it clear that there is not unanimous agreement among law-enforcement officials on the tactics. St. Louis County has been in control of operations along with Ferguson, and the next most senior jurisdiction is likely the highway patrol.

This morning tweets went out from Mayor Francis Slay, County Executive Charlie Dooley and Governor Jay Nixon that seem to indicate a decision either has been made or is coming soon:

Excessive use of force whether during an arrest or a protest is not acceptable. Getting answers this morning from @stlcountypd.

I have spoken to federal, MO, county officials, expressed these views and offered the city's experience. #fgs

At least one report is citing Lacy Clay, confirming that the county will be taken out of control:

A spokesman for Clay would not directly address this rumor, saying only that it will be left to Nixon to announce.

"The congressman is having conversations with the governor about urgent situation in Ferguson," said a spokesman for Clay. "The governor will be making an announcement soon."

If St. Louis County is taken out of command, it's conceivable that the St. Louis Metropolitan Police Department could assume command of the Ferguson operation. The potential for National Guard presence has also been mentioned.

Update 11:45 a.m.: At a press conference, Nixon alluded multiple times to a future "operational shift" but would not say if St. Louis County will be removed. "I think you all will see a different tone," he said. The governor is meeting again with reporters at 3 p.m.

This situation is still developing; we'll update as soon as we know more.