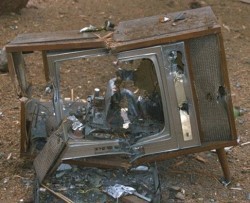 Don't let Big Screen Plus near your tube, says the BBB.
The BBB reports that they've received 18 complaints against the business in the last three years. Its owner, Richard Tawfeek, failed to respond to a whopping 16 of those.

The complaints include shoddy repairs, contract issues and service issues. The gist, however, appears to be mostly that Big Screen Plus took customer's money -- and then completely failed to fix their TV sets.

Bill Smith, a trade practice investigator with the BBB, tells Daily RFT that -- after the BBB went public with the complaints against him -- Tawfeek acknowledged that at least eight of those complaints are legit. He apparently vowed to the BBB at that point both to make those customers whole and then to shutter his business.


But Smith says the BBB is taking a wait-and-see attitude at this point.

"People obviously make promises all the time," Smith says. "We've had situations where people promise to close -- and then they change company names or even continue to operate under the same business."

The Better Business Bureau has received numerous complaints against this firm that repairs big-screen TV's. Consumers reported that the firm accepted payment, removed parts from their TV and promised to return later to complete repairs. When the firm failed to return, calls to the company went unanswered or failed to make promised and timely repairs. These promises were not kept. Some complainants also reported that the firm completed repairs, but the problems returned soon after completion. These complaint patterns are reflected in the complaint statistics below.

Daily RFT left a detailed message on Big Screen Plus' voice mail, asking for an explanation. We'll update this post if we hear back.

In the mean time, the BBB's Smith suggests some basic precautions for consumers. Don't hire a TV repair guy who doesn't have a fixed address. "If they don't have a shop they're actually working out of, that's a potential red flag," he says. (Tawfeek, for one, had registered his business to his mother's house, and simply brought his tools to his clients' homes -- obviously, not a good sign.)

Also, Smith says, be wary of repairmen who insist on payment by cash or check. "With a credit card, you can always take that to the credit card company or the bank and say, 'I didn't get what I paid for.'" After you've given someone cash or check, your options are obviously limited.