Yes, that is the parking lot of the Crestwood Court Mall as it appeared last Saturday afternoon. That's the same Crestwood Court Mall that is about to lose one of its two anchor stores and where enochlophobes can shop in peace, even on Black Friday. It took Unreal a whole ten minutes to find a parking spot at the very edge of the lot, practically on Watson Road and nearly as long to find our way inside. (The automatic doors outside The Pasta House Co. weren't working. "This place has really gone downhill," groused a man walking behind us.) 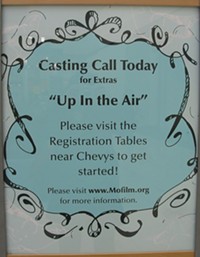 Up In the Air, of course, is the movie that will be filming here in St. Louis this spring and which stars George Clooney. Casting director Joni Tackette was searching for 2,100 good men and women to be extras. On Saturday, the first day of the two-day open call, 4,000 people showed up.

"It's just like American Idol!" said Bryan Harris. "No, I don't speak from personal experience, I was just cracking a joke. I asked if they had Randy and Paula up there, but no one liked that joke, either." This was the front of the line around 2:30 p.m. Most of the people who had gotten this far had been waiting for three hours or more. They were relatively late arrivals.

"The doors open at 6 for the mall walkers," said Leisa Son, the mall's marketing director. "People were here. By 7, there were more than 100."

The casting started early, at 8:45 instead of 10 as scheduled. "You never know what kind of crowd you're going to get," Tackette said.

The duties of the mall cop (pictured above behind he Wilford Brimley look-a-like in a trench coat) did not get any more strenuous than what you see here. "It's been amazing," Son told us. "People are so excited, but they've stayed calm and followed directions. Even at the end of the line, they're still smiling. They're happy to be a part of it."

Up in the Air concerns, in part, the quest of a man, played by Clooney, whose life goal is to accumulate one million frequent flier miles. Therefore, a lot of it takes place in airports.

Preparing for the casting call was sort of like getting ready to spend several hours trapped in an airport. Unreal, accordingly, packed a lot of reading material. But we had nothing on some of the other people we met.

Many were decked out in suits. "Everyone looks so well-dressed today," Son marveled. "You don't usually see such a professional look in the mall on Saturday afternoon."

Holly Buzzard and Lona Russum had come to the mall wearing heels, but after a few hours in line, they started to feel pangs of regret. "We went to Payless," Buzzard said, showing off her new furry blue slippers. "My feet hurt so bad."

"We went and sat in those little chairs and got a massage," Russum added. 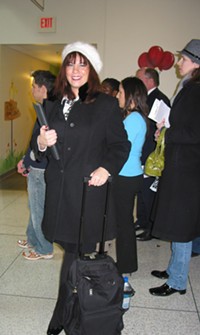 Laurie Manoli brought a prop: a suitcase. Was it to look more like a business traveler? "Yeah, a little bit," she said. "But I've got water in there, and I can put my coat in there if I get hot."

Manoli also had a scoop for us: "I swear, I saw the director [Jason Reitman] walk past here half an hour ago. He was wearing a baseball cap. I looked at him, he looked at me, and I was like, oh, my God."

Later, Tackette reluctantly confirmed that Reitman had, indeed, been in the house. ("We don't want to get people's hopes up in case he doesn't come back tomorrow.") "It's cool that he stopped by," she said. "Not a lot of directors would do that. He loved some of the people that he saw.

"He's looking for a lot of general Midwest faces and people who could be travelers," she continued. "Faces are set dressing. They tell about the location. There are many airport scenes, but also hotels and a wedding."

Was Clooney also around? "Absolutely, one hundred percent...not," said Tackette. "That's been my top question of the day. There'd have been a lot of screaming if he was."

At 3:00, Son announced that anybody who had not gotten a ticket to stand in line would not be seen that day. They could either come back Sunday or mail in their extra applications.

"Mail it in? Fabulous!" said Kathryn Crumrine. "Like they're going to look at me and go, yeah, she's the one."

Dana Parker, Tyler Voss and Mason Born were glum. "We just got here twenty minutes ago," Parker said. "We drove three hours, from the University of Illinois at Urbana."

"We're going to wait around," Born said. "They said they were stopping at four, but if anything opens up, they said we might get in. So we might as well."

The three are acting students, so they summoned their thespian skills and smiled for us: Some of the mall's merchants were taking advantage of their captive audience. LensCrafters set out a table where people in line could get their glasses cleaned. Suzy Anderson of St. Louis Workout was doing a brisk business in bottled water and energy bars. "We figured we'd come up here and feed the people," she said.

It is a little-known fact, but Crestwood Court is trying to reinvent itself as an arts center. (That was one reason, Son speculated, that the mall had been chosen to host the casting call. But Tackette said the main reason was that it was close to her house in Webster Groves and because it had a lot of parking.)

Hank Buschkemper wandered through the crowd handing out fliers for the mall's new dance studio, which would take over several empty store spaces and give lessons in tap, ballroom and Irish and Indian dancing. (You can't accuse them of not providing something for everyone.)

Members of the Royal Dumpe Dinner Theatre, garbed in full Renaissance costume, handed out buy-one-get-one-free coupons for Saturday night's performance. They didn't mind that their clothes would keep them from being cast as extras. "It's good advertising," said Robyn Decradle (her Royal Dumpe name). "We're on every Saturday evening."

The scene at the front of the line was anticlimactic. Jerry Jones of the Missouri Film Commission ushered hopefuls into the casting area, where Tackette and her people sat at several long tables. 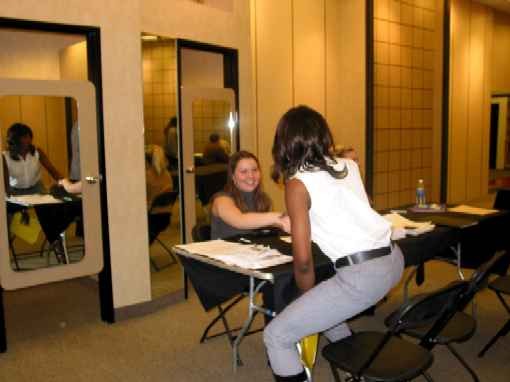 "We just gave them our info," said Keegan Darr, who saw one of the casting directors with two friends. "We asked more questions than she did. She just wanted to know our availability and then said if we were chosen, if would be between March 3 and April 22 and we'd have one to three days notice. It took five minutes. We'd waited since 10 a.m."

"We get a list from the directing staff of what they want in the background," said Tackette, "and then we go through the files and find the faces."

She paused to take a picture of a woman named Louanne, who had worked as an airline gate agent for 26 years and had shown up in full uniform. "Excellent," she said. "You've got a really good shot."

Tackette turned back to us."'We're looking for people like Louanne," she said, "people who have real-life experience. They look authentic. They know how to handle the equipment and are comfortable in the environment. The director loves that."

Unreal briefly considered slipping her our application, which we had painstakingly filled out the day before. (Yes, we have an "international type wardrobe" if that means owning several black overcoats. No, we are not a member of the Screen Actors Guild. But doesn't that snapshot of us look adorable?) But that would be cheating, we decided, taking advantage of our role as reporter to get to the front of the line.

We're gonna mail the sucker in.