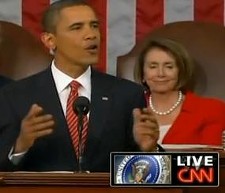 cnn.com
Did you watch President Barack Obama's speech last night to Congress? If not, you can view the entire 48-minute address here.

Overall, I thought the president's plan seemed to make sense as well as address some of the sticking points conservatives have with the bill.

But then, what do I know? As one reader of this blog has pointed out, I'm nothing more than a "useless liberal tool."

Looking to broaden my outlook, this morning I checked out the website of the St. Louis Tea Party Coalition to see what they had say about Obama's message. Here are a few pearls of wisdom I came away with...

The President of the United States will effectively look into the television camera and hoist the middle finger of his left hand to you tonight, dear patriot.

According to sources familiar with his healthcare speech, the President has determined that he wants to takeover all of healthcare and that he has votes in Congress-you will deal with it or he will deal with you (h/t Gateway Pundit).

So there. Screw you, America.

Ratings:  DO NOT watch the speech live.  Do not DVR the speech. Instead, what the recap on Fox News. Use the time to read the Constitution. The text of the speech will be available online immediately after or during. The speech. Read it.

In the end, it's up to you. You can judge him by his consoling, conciliatory words, or by his radical and arrogant actions.  He surrounds himself with communists, radicals, racists, and eugenicists and speaks like Gandhi.

His nose had been growing slowly throughout the speech, but now it jumped out a good six inches. Only a fool can seriously believe that he can implement a $900 billion spending program over ten years without increasing the deficit, raising taxes, or rationing services. And remember, the original cost estimates for Social Security and Medicare were way too low. Bend over and grab your socks, middle-class taxpayers!