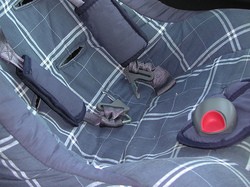 http://www.flickr.com/photos/zoonie/
Woops! Remember how, last week, we blogged about a chilling event up in LaGrange, MO in which a two-year-old girl was being yanked from a Jeep Cherokee by a shabby kidnapper, but her mother heroically saved her by slamming the car door onto his fingers? 'Member that?

Didn't happen, the lady made it up.

The LaGrange police and Lewis County prosecutor aren't releasing her name, nor an explanation as to why she spun the yarn. But Lt. Don Cibert tells the Daily RFT that the woman, very upset during a ten-minute interview last night, gave up the gag.

Filing a false police report is a class B misdemeanor, and if convicted, the woman could do some jail time, Cibert adds. She's not in custody now, but Cibert expects charges to be filed eventually.