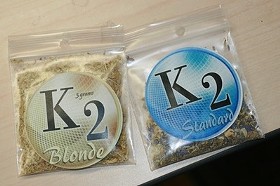 Goodbye, legal fake weed. It's not like you ever got anyone high anyway.

The effects of the artificial pot substitute K2 are debatable. (It worked a little for the testers from our sister paper, the KC Pitch; not so much for the Daily RFT guinea pigs.)

Nonetheless, both houses of the Missouri state legislature have voted to classify K2 as an illegal substance, like real pot. The Senate passed (but did not bogart -- heh heh) the legislation today but, in a show of mercy, voted to make possession a misdemeanor instead of a felony.

"I don't think we need any more teenage kids having a felony on their records," Jolie Justus, the Kansas City senator who proposed the misdemeanor charges, told the Columbia Tribune. She pointed out that kids are likely to experiment with stuff like K2 when they are young and stupid but that a felony could follow them for the rest of their lives and make it difficult to get a job, among other things.

Kansas has already banned K2, as have St. Charles and Pettis Counties in Missouri. The bill banning K2 has been classified as an "emergency" and will become a law as soon as it is signed by Governor Jay Nixon.