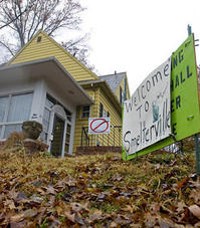 This just in from the Concerned Citizens for Crystal City (C4). Mining concern Wings Enterprises of Sullivan, Missouri, is moving forward with its plans to build a controversial iron-ore smelter in the Jefferson County town of Crystal City.

On Thursday night, the Crystal City Planning and Zoning Board will meet to consider permit applications for the smelter slated for construction just east of the city's historic downtown and residential district. Thursday's meeting will be held at the Crystal City High School at 6:30 p.m.

Members of C4 are encouraging everyone concerned with the smelter to attend. Based on past gatherings -- in which residents have shouted at council members and the mayor has threatened to have people arrested -- the meeting should be lively. Last January the smelter project was the subject of a Riverfront Times' cover story, "Smelterville."