Consider yourself lucky if you've been able to avoid the sick, sad tale of the family of incestuous hillbillies from Independence, Missouri.

In what has to rank as the most stomach-turning story since Jaycee Dugard, 76-year-old Burrell "Ed" Mohler Sr. is accused of repeatedly raping his elementary school-aged granddaughters and videotaping the acts. Oh yeah, five of his sons and his brother allegedly took part too.

It gets worse. We'll spare the icky details but just know that there's a chicken coop, "mock weddings," and the "Itsy Bitsy Spider" song involved.

That's not what this entry is about, though. No, see Mohler was a church-going man (didn't see that one coming, did you?) and "well-respected" in the community so he still has a small contingent of supporters standing behind him (that's meant in the least sexual way possible, btw) who've denied all allegations even though the evidence overwhelmingly suggests that the guy is probably the biggest perv since Gordon Northcott.

Here's the mugshots and the story in this morning's Post-Dispatch (via McClatchy Newspapers). Note the somewhat misleading headline: 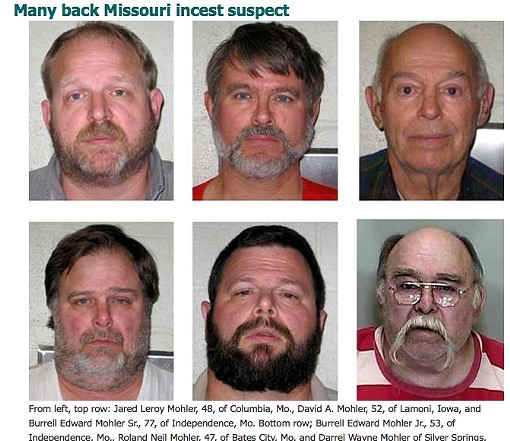 It's misleading because the only so-called "supporters" the article quotes are Mohler's brother-in-law and a woman who sang duets with his wife in church.

Read it and weep:

Many stand fiercely by Mohler and his four sons, Ed, David, Roland and Jared, as well as his brother, Darrel -- all in jail.

Gina Fauth, a good friend who sang church duets with Burrell Mohler Sr.'s wife, doesn't buy any of the allegations.

"He's a very respectable man," Fauth said. "I have no reason to not trust him. It's mind-boggling. I'm just sick over it."

What about the prosecutor's relentlessly recounted atrocities against girls as young as 5?

Yet all or nearly all six children of Burrell "Ed" Mohler Jr. gave credence to the tales of twisted family relationships, according to court documents.

Nor did it help the senior Mohler's legal defense or public image as a grandfather when police hauled incest pornography out of his home in Independence, Mo.

The story actually goes on to detail how the head of the local Mormon church was notified by at least one granddaughter about the allegations years ago but failed to alert law enforcement. That buried detail tells you just about everything you need to know about Mohler's bible-thumping apologists, doesn't it?