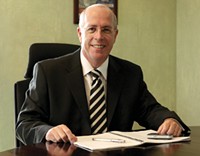 Carruthers pled guilty today in U.S. District Court to one count of racketeering. In exchange, the feds will drop seven counts of fraud pending against him.

Carruthers has been on house arrest, in a Clayton high-rise, since his arrest in the summer of 2006.

He now faces probably no more -- and possibly less -- than 33 months in a federal penitentiary under an arrangement struck with prosecutors. The "memorandum of agreement" between the parties states that Carruthers must "provide truthful and complete cooperation" about BETonSPORTS' activities before and at trial.

Carruthers is a wordly and amiable Scotsman who apparently brought much-needed, what's the word, class, to the rough-around-the-edges operation that was BETonSPORTS when he arrived in 2000...

That's what I reported back in my October 2007 cover story, "Double Down": BETonSPORTS' founder Gary Kaplan had the street-smarts. Carruthers had the suit and the Rolodex to take the company public on London's AIM stock exchange. As I wrote:

Kaplan in 2000 placed an ad in the Daily Racing Form looking for a CEO. The ideal candidate would have no interest in the minutiae of BOS' daily operations. Instead, the CEO would be an ambassador, so to speak, a professional public face for the business.

"Gary had come up with a plan to take the company public," recalls Weitzner. "He bragged about it to me. He said he was going to make his millions through stock. I laughed at him. I said, 'How are you going to go public? You're a bookmaker with a bad record.'"

Kaplan's answer was David Carruthers, a Scotsman who, at age nineteen, had become the youngest manager at the elder statesman of British betting shops, Ladbrokes. With an MBA from a British university, a grasp of international politics and a wide-reaching professional network, the 50-year-old Carruthers, according to insiders, became the crux of Kaplan's so-called "escape strategy."

BETonSPORTS operated offshore and was staffed with a lot of foreign nationals, but there were a few Americans in the bunch. Perhaps my favorite quote in the piece comes from a St. Louisan who worked in PR for the company for a time:

"David was a breath of fresh air for the industry -- well-respected, intelligent and well-rounded," remembers Kevin Smith, a former trade reporter who later became the spokesman for BOS. "When I covered the business I was used to dealing with fuckwads who'd say, 'I'm going to do so much for this industry,' and then never did a thing. With David, for once, I wasn't dealing with a used-car salesman."

The BETonSPORTS trial here in St. Louis is right now scheduled for September 21. (The defendants tried to get the trial moved to Miami - to no avail.) Carruthers' sentencing is scheduled for October 2.