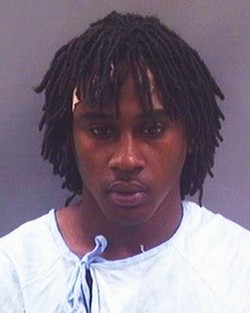 Davis was driving a stolen car that police in Brentwood and Charlack had attempted to pull over in St. Louis County late Wednesday night.

A police helicopter later tracked the vehicle to St. Louis City. Davis was behind the wheel of the car when it sped through the intersection of N. Grand Boulevard and Cass Avenue, crashing into a vehicle driven by Russell. Russell, 24, died on the scene around 12:41 a.m. Thursday. (Click here for a full account of the police chase and wreck.)

In addition to second-degree murder, Davis was also charged with first-degree tampering with a motor vehicle, leaving the scene of an accident and unlawful possession of a firearm. St. Louis police report that a loaded .380 caliber, semi-automatic pistol was found on the passenger seat of the stolen vehicle that Davis fled following the crash.

The police helicopter witnessed Davis pull over and let one or two occupants out of the stolen car just minutes before the deadly crash. Those suspects have yet to be located by police.