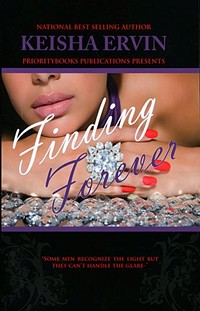 A new edition of the paper will be out later tonight or tomorrow, so today's the last time I'll post an excerpt from Keisha Ervin's books. Ervin was featured in last week's cover story, "Lit Up," which chronicled the booming market for street/urban/ghetto fiction. (Note to any of you budding authors out there -- I've already heard from a bunch -- to get in touch with literary agent Brenda Hampton, visit her Web site.)

Today's selection comes from Ervin's most recent title, Finding Forever. It's a saaaaaad one. Ervin calls it her "twist" on A Walk to Remember. Whitney and Koran, old high-school sweethearts, are reunited many years later. They fall in love again. But complications beyond their control ensue. Whitney has a big secret she's loath to share...


"Let me tell yo' lil' ass something." He gripped her waist and pulled her close. "I ain't none of these lil' lame ass niggas you been fuckin' wit the last eight years, so don't ever in your life come out your neck at me sideways. If you got a problem, come holla at me so we can discuss it. Now I told you, I ain't fuckin' that bitch and I ain't been fuckin' that bitch! But if you wanna act all crazy and shit, I'ma act crazy right along wit' yo' ass until you tell me what the fuck is wrong wit you!"

"I'M DYING!" she screamed so loud her neighbors could hear.

"What you mean you dying?" Koran released her and stepped back.

"I have leukemia." She inhaled deeply as tears rolled from the corners of her eyes.

"C'mon, Whitney, if you wanna break up then say it, but you ain't gotta say no ignorant shit like that."

"Yeah, okay, Whitney. You got leukemia. Tell me anything."

"Why the fuck would I lie to you about something like that?"

"Man, get the fuck outta here." He balled up his fists, pissed. "You ain't got no goddamn cancer! You just mad 'cause you ran into ole' girl and now you wanna run again! Well, guess what? If that's what you wanna do, then step! Go the fuck head 'cause I ain't got time for the games, ma! This shit here is too much." Koran threw his hands in the air. "Ya'll muthafuckas is gettin' on my nerves! First, I had to argue wit Trina! Now I got to turn around and argue wit yo' ass? Nah, I'm not having it! If you wanna run, run!"

"You know what? You's a selfish muthafucka! Everything always gotta be about you! Maybe Trina wasn't lying! Maybe ya'll are together, since you want me to go so bad!"