Sixteen Reasons Mizzou Won't Make it Past the Sweet Sixteen

Mizzou surprised even its most optimistic fans when it won the Big 12 tournament last week. It was an impressive performance, especially for a team that absolutely stunk in road games all season. Now the Tigers seem to be hitting their stride at just the right time of the year, winning ten of their last twelve en route to their highest tourney seed since 1994. 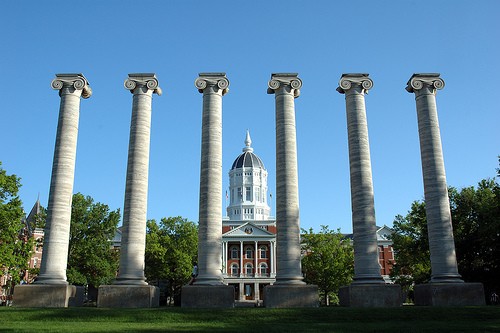 Still, it's called March Madness for a reason: teams that are playing well -- even at their peak -- can lose at anytime.
Here's sixteen reasons (for symmetry's sake) why Mizzou won't make it past the Sweet Sixteen.
1. The West is the toughest region in the tournament. One-seed UConn was one of the top teams in the country all year, Memphis has won 25 games in a row and could easily have been a one-seed, and Washington won the Pac-10 and got low-balled as a four-seed. Hell, Mississippi State just won the SEC tournament and they're the 13 seed in the region.
2. Boise, Idaho. Where Mizzou plays its first-round game. It was a long time ago but nobody has forgotten Tyus Edney and all the bad memories he created in a 4.8 seconds in 1995. Cursed? I wouldn't bet against it.
3. Memphis is Mad. That other group of Tigers in the region are playing with a chip on their shoulder after another fantastic year. John Calipari's crew felt they deserved a one seed (even though they couldn't beat anyone outside of the weak C-USA) and now they're out for blood. Mizzou's most likely foe should they reach the third round plays a similar style of ball to them, particularly with lockdown defense, and that extra motivation might mean the difference.
4. Cornell could do it. Ivy League teams are historically first-round fodder (one hasn't won since Princeton beat Nevada in 1998), but the Big Red could chew up Mizzou and spit them right out of the tournament. They return four starters from last year's tournament team, including seven-foot center Jeff Foote and dynamic point guard Louis Dale.
5. Cal is a terrible match-up. The Bears were the only Pac-10 team to beat conference champion Washington twice this season, and the Huskies play a very similar uptempo game to Mizzou. Mike Montgomery's team plays disciplined and doesn't turn the ball over as much as they did earlier this year when DeMarre Carroll and Co. stomped them 93-66 in Columbia. Think they're looking for a little revenge?
6. They're Not In Columbia Anymore. The Big 12 tournament may have exorcised a few of Mizzou's road demons but this is still the same team that won just five games away from their home court in 2008-09. Kansas City would have been a cake walk but traveling to Boise and Glendale will be a true test.

7. Marquette Means Business. The battle-tested Big East squad may be without their MVP, senior point guard Dominic James who is out with a broken foot, but they still have two all-Big East guards in Jerel McNeal and Wesley Matthews. If they can get by Utah State, Mizzou might  be in for trouble.
8. Speaking of Utah State... They annihilated  Nevada in the WAC title game, quieting any doubters who said the 30-win team didn't deserve to dance. With conference player of the year Gary Wilkinson and Tai Wesley, the Aggies have an imposing front court.
9. And I haven't even mentioned Maryland yet. The Terps may not be the same Juan Dixon/Chris Wilcox led crew that won the title in 2001, but they're still a threat to take down a few teams with a tourney run. If they can beat Michigan State, North Carolina and Wake Forrest (which they did), they can certainly beat Mizzou.
10. Winning the Big 12 Tournament was a bad sign. The New York Times took a gander and found that since the tournament expanded to 64 teams in 1985, only 11 of 24 national champions won their conference tournament. The Tigers might be too tired or too confident to win the early round match-ups.
11. Inexperience. Other than Coach Mike Anderson's son, who played for his father's UAB tourney team a few years back, no Tiger has ever been to the big dance.
12. Karma. The Quinn Snyder era is out there in the cosmos and it will come back to bite Mizzou one of these days.
13. Fast pace equals fast exit. The fastest 40 minutes may be fun to watch but the tournament almost always comes down to converting half-court possessions. The Tigers have done so at times but a team that can really slow the pace of the game and control the clock and the ball could easily upset this team. Mike Anderson won a few early-round games by playing the same style with UAB but was never advanced past the Sweet Sixteen, ever wonder why?
14. Size matters. At 6'9" (with his boots on) Leo Lyons is the tallest Tiger that plays regular minutes. A matchup against a team with significant height advantage (Cal and Cornell both have seven-footers) could be trouble, especially since DeMarre Carroll has a tough time finishing in the paint against taller opponents. They'll need him in the clutch to get past the third round.
15. First-half holes are killers. While Mizzou was able to overcome a 21-point deficit against Texas Tech in the Big 12 tournament, big leads like that aren't so easily surmounted in March Madness. They may be 3-1 when trailing by ten or more at the half, but as the saying goes: it's easier to keep up than it is to catch up.
16. The Odds. Mizzou is a great team with great players but March is a crap shoot. They might play their best basketball of the season but still lose to a team like Memphis. And with fifteen other good reasons why they might not make it past the sweet sixteen what's to say chance won't have anything to do with it. Here's hoping I'm wrong.