Rockies vs. Cardinals 9/27/09: The Photographer Who Caught the Catch That Probably Wasn't 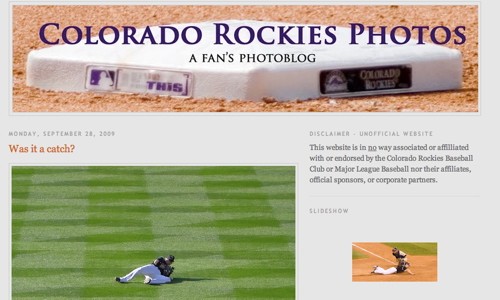 In just a moment we're going to hear from Craig Welling, a Denver blogger who snapped a photograph that was the source of much argument and consternation around the Interwebs last week.
First, some background. On Tuesday RFT sports blogger Aaron Schafer dipped into a brewing controversy surrounding the play that ended Sunday's Cardinals-Rockies game.

Fans of both teams no doubt recall the situation: Rockies up 4-3, top of the ninth. One out, Albert Pujols on first, Julio Lugo on third, Ryan Ludwick at bat. Ludwick hits a pop fly to center, Rockies second baseman Clint Barmes makes a back-to-home-plate running, diving, tumbling grab, then springs to his feet in plenty of time to double Pujols off first.

You can watch the play for yourself here and here, and see the box score here. For the Cardinals and their fans, the play marked a disappointing conclusion to a disappointing and deflating three-game set.

As Aaron recounts in his piece, "A Hose Job in the Mountains?" Denver-area blogger/photographer Craig Welling posted photographic evidence suggesting that Barmes' highlight-reel catch may not have been a catch at all.
Here's the revelatory photo Welling published on his blog, Colorado Rockies Photos: 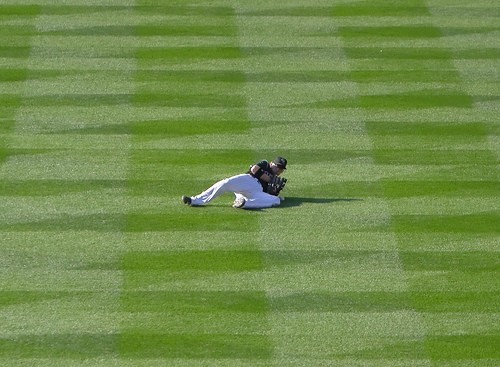 Craig Welling
You have to peer in closely; if you do you can see, on the grass beneath Barmes' glove, just to the right of where his left knee meets his shadow, a baseball.
Can't make it out? Here's a closer look:

...despite the fact that Denver Post photographer Hyoung Chang also had fired a shot that was far less conclusive -- a fact that was revealed in a subsequent Denver Post blog item that also brought Mr. Welling's photo into the fray: 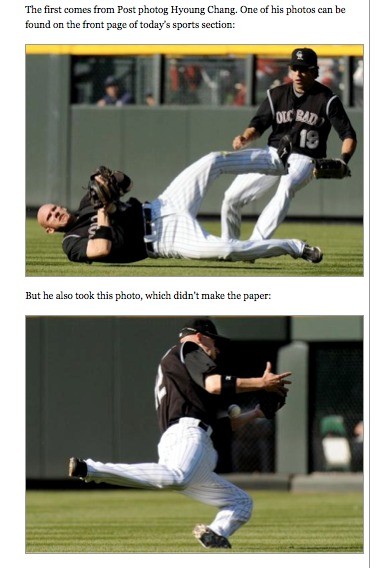 Welling, 39, also posted the series of photos on Flickr, where the ball-on-the-ground frame drew 7,000 pageviews, and on the Denver Post's gallery of fan-submitted photos, which has logged more than 40,000 views so far.
Welling says he typically takes in up to twenty Rockies games a season (he saw every home game during Colorado's 2007 postseason run) and likes to roam around taking pictures of the action from different parts of the stadium.
"I was on the concourse, down the first base line," he says of his ninth-inning whereabouts last Sunday. "I was standing there talking to some people that I had met. It was happenstance. The stadium was packed that day. There wasn't a lot of ability to move around, so I just looked for a decent vantage point and spent the last couple innings there."
When Ludwick stepped to the plate, Welling happened to be in perhaps the only place where one could see what his Canon EOS 40D saw.
I had a very goofy angle on the play," he points out. "I was just parallel to it. If you think about it, the time it was on the ground was the same time [Barmes'] leg was on the ground. So there's no way to have seen it from the infield vantage point [as an umpire would have], or by the photographers in the first-base dugout well."
Welling says he can't see how the umpire could have called it any other way. "I don't consider it by any stretch of the imagination a blown call," he says. "I don't think anybody could have seen it otherwise. If you look at that play in real time, it's lightning-fast."
--
But how boring life would be without conspiracy theorists.
On Sunday night Welling posted a series of sixteen photos documenting the game-ending play, under the headline "Amazing catch!!" The next morning, having taken a closer look at what he'd captured, he published a follow-up that showed only the frame with the ball on the ground and a close crop of that frame. The headline: "Was it a catch?"
Almost as soon as visitors converged on Welling's blog, the skeptics piped up:
"Yea, Yea, Yea...Here's a picture...so it must be true. Pictures can be doctored, you know. All of the various camera angles of the various replays do not show the ball on the ground."
One took a more frontal approach: "Go back to photographing squirrels in your backyard. You're a douche and hardly a baseball fan."
Wrote another: "So, so easy to Photoshop!"
"You can do wonderful things in Photoshop," responds Welling. "I just didn't."
Welling says the only alterations he made to the pictures he posted involved cropping and boosting the exposure to compensate for having used a faster shutter speed for clarity.
In response to our request, Welling e-mailed Riverfront Times a copy of the frame in question in its raw digital form. (That file is the source of the extreme blow-up image in this post.) According to RFT art director and resident Photoshop expert Tom Carlson, Welling's photo is the genuine, unaltered article. Apart from the image itself -- the difficulty of inserting or moving the pixilated shape of a baseball without leaving a trace -- there's the matter of manipulating the "metadata" embedded in that raw file:

The image was created on 9/27/09 at a little before 4:22 p.m., which matches the time the Cards-Rox game ended. The raw file was unaltered after that until RFT brought it into Photoshop.
"I don't know what to tell you about where the ball moved or where it was in the series of photos," Welling sums up. "All I did was post the pictures, and people can certainly draw their own conclusions as to where it moved."
And they will, and this moment will pass, and both teams will be in the postseason -- and there'll be other moments for people to argue about.
Concludes Welling: "That's the beautiful part of the game, isn't it?"
If you're interested in seeing more of Welling's shots, when you're done checking out his Rockies blog, see the Omaha native's other labor of love: College Baseball Photoblog, a pictorial tour through the annual College World Series.
© 2023 Riverfront Times