flickr.com/photos/fringehog
Note: A follow-up to this story can be found here.

The City of St. Louis has yet to issue warrants against those who refuse to pay tickets generated from red-light cameras, but it has turned their names over to a collection agency.

Last month scofflaws who haven't paid the tickets began receiving letters from a San Antonio, Texas, law firm. The message? Pay your $100 fine or risk having the ticket impact your credit rating.

The letter from the firm Linebarger Goggan Blair & Sampson asks that recipients pay the original $100 fine with no additional fees or penalties.

I tried talking to a representative from Linebarger today, but after being placed on hold for twenty minutes I could no longer face the Muzak and gave up. The firm's Web site claims that it specializes in "professional collection services to government clients."

Last year I wrote how the city was essentially powerless to enforce the tickets and was not issuing warrants if people simply chose to ignore the citations. But that's not true -- at least not anymore -- says Ed Rhode, spokesman for Mayor Francis Slay.

"The city can issue warrants if it chooses to do so, but at this time we've elected not to go heavy-handed as our focus is on safety and changing behavior," explains Rhode.

To date, the mayor's office says that it has adjudicated or collected on 70 percent of tickets generated from the cameras. Another 35,000 tickets have gone unpaid, costing the city as much as $2.4 million. (Under the contract the city has with camera operator American Traffic Solutions, the city gets $68.67 from each ticket with ATS getting the remainder of each $100 citation.)

With so much money at stake, it's clear why the city would want to collect on the unpaid tickets. But why the need to hire an out-of-state law firm to handle the collections?

Rhode says that the city sent out an RFP for a "comprehensive debt collection initiative." A selection committee later awarded contracts to Linebarger and two local law firms.

"The decision was made to ask the Linebarger firm to start with all outstanding collection in the City Courts, including red-light camera tickets, as these are not collections typically sought after by the Collector of Revenue," says the spokesman.

Note: Special thanks to the tipster who sent in the collection letter below. The person's name and other identifying information have been removed. Click on the text for a larger view of the letter. 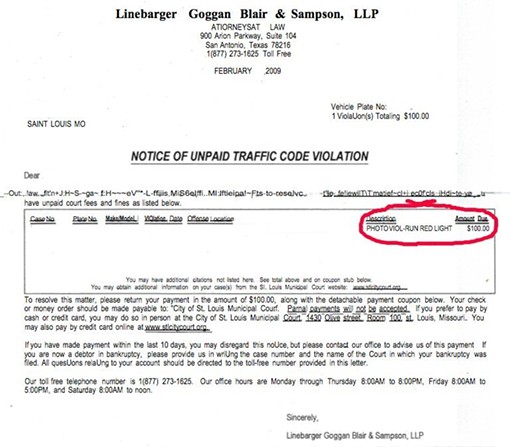