On this Cinco de Mayo, comes a reminder that the Cardinals draw a diverse crowd of fans to each of their games at Busch Stadium. And by that, I mean more than a few folks in homemade T-shirts with cringe-inducing slogans. Take this photo below for example. Yikes. St. Louis-based sports blog JoeSportsFan.com spotted this guy who was likely very proud of himself. 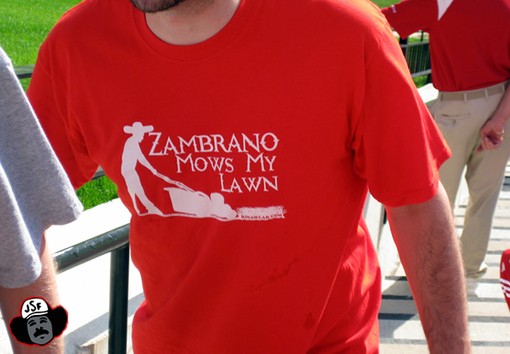 via Joe Sports Fan.
Purely a coincidence that this photo was posted on Cinco de Mayo.
You only wish they would have included the guy's face in this photo. To their credit, the typically crotchety, geriatric ushers at Busch Stadium forced him to turn his shirt inside out,  along with a variety of other shirts that had such profanity as the word (earmuffs!) "sucks" on screened on them. If the Rundown had an Ass Clown of the Week, this bigoted hoosier would win hands-down.