GENEVA, SWITZERLAND -- Scientists working for CERN, the European scientific body responsible for the Large Hadron Collider project, have announced today that they have discovered the source of an anomaly first detected Sunday evening.

"What we first suspected to be a miniature, temporary black hole has now been determined to have, in fact, been a fastball thrown by the Tampa Bay Rays' Matt Garza," said CERN chairperson Lee Einertson on Tuesday morning.

After carefully reviewing both their own instruments' recordings, as well as tapes of the game, the CERN researchers have determined that a fastball thrown by Garza in the third inning of Sunday night's game actually exceeded the speed of light and passed through his catcher, Dioner Navarro, the backstop area behind the catcher, and the fabric of time before finally being called a strike on the outside corner.

"At this point, it appears that the ball traveled briefly backward in time, becoming infinitely red shifted for a single moment, then collided with an earlier version of itself," Einertson continued. "At that point, the fastball decelerated rapidly, and was thus recorded at 96 mph on the radar gun at Tropicana Field and called a strike."

Jason Varitek, the hitter at the time Garza broke the speed of light, said he was unable to perceive exactly what had happened, but was aware there was something odd about the pitch. 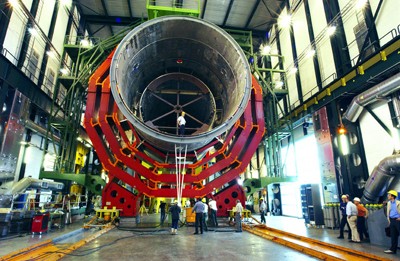 "Well, when Garza let go of the ball, I thought something was kind of weird about it," Varitek said when reached by phone from his home. "Usually, when a guy lets go of the ball, you try to pick up the rotation on it, see if you can tell if it's like a breaking ball, or a fastball, or whatever. That pitch, though, just sort of hovered there, then winked out of existence for a second, then reappeared like twenty foot closer to the plate. It was definitely outside, though."

Garza himself, known for throwing consistently in the mid to high 90s, said he was unsurprised by the revelation.

"Well, you know, [Varitek] had fouled off a couple of good pitches the at bat before," Garza said when he was told of the findings. "Plus, he's always been a good breaking ball hitter, so I just reached back for a little extra to try and get it by him. I guess breaking the speed of light's why my shoulder is a little sore today."

In addition to the pitch's abnormal velocity, the speed also caused the ball to become infinitely dense, allowing Garza to get good sinking action on the pitch.

The CERN scientists have promised they will continue to examine the pitch in question in order to try and learn more about quantum mechanics and the possible existence of particles smaller than those found on the Planck scale, but have already hinted that more announcements could be made in the coming days. Observers have speculated that said announcements may include that the ball, rather than traveling backward through time actually went forward, meaning time is cyclical, and that the pitch was, in fact, both outside and slightly low.