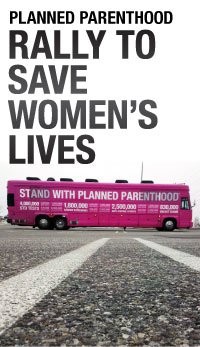 Pro-choice forces are galvanizing to oppose the measure in the U.S. Senate, where it's still pending. And tomorrow, Cecile Richards, the president of Planned Parenthood Federation of America, stops in St. Louis to attend a rally against the measure.

Two pieces of legislation that passed in the House imperil funding for Planned Parenthood: One guts Title X's budget entirely, and another says that any entity that performs abortions, which Planned Parenthood does, is not eligible for Title X money.

Abortions, though, aren't subsidized through Title X money. That money can only go toward preventive care, like cancer screenings or birth control.

Richards will appear at tomorrow's rally, which is scheduled for 3 p.m. at Planned Parenthood of the St. Louis Region, 4251 Forest Park Avenue.