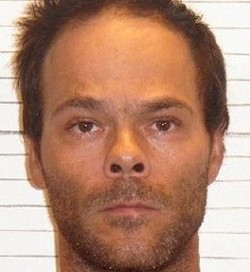 Dennis Iagulli
Dennis Iagulli pleaded guilty yesterday to his role in a truly disturbing murder of a fellow homeless man in June 2010.

Parts of 22-year-old Zachary Irvin's body were found on fire that month near an abandoned East St. Louis warehouse that served as a homeless camp. Authorities have long held that Iagulli and a fellow vagrant by the name of James Pierson attacked Irvin because they believed he had started a fight with some of their friends.

Following yesterday's guilty plea, those authorities now have an all too vivid account of what occurred.

As the Post-Dispatch and other outlets report today, Iagulli told an Illinois judge Wednesday that he and Pierson awoke Irvin with flashlights and a gunshot back in June 2010. Iagulli then stripped Irvin and tied him to a chair. He had Pierson leave the room as he sexually assaulted Irvin.

After a while, Iagulli left the warehouse to go have lunch at a St. Louis homeless shelter. (Iagulli is a diabetic and needed food to regulate his blood sugar levels.) He asked Pierson to watch Irvin until he got back.

Iagulli was returning to the warehouse after lunch when he saw Pierson under the Eads Bridge wearing some of Irvin's clothes. Pierson informed Iagulli that they had a "mess" to clean up at the warehouse. Irvin had come free from his bounds and tried to escape only for Pierson to shoot him in the neck.

When the men returned to the warehouse, they then dismembered Irvin's body using -- among other things -- a meat cleaver, a hack saw and some tin ships.

Iagulli was sentenced to 35 years in prison immediately following his guilty plea. Pierson is scheduled to go to trial next month.
© 2023 Riverfront Times