"Holocaust" Artist Gets 20 Days in the Slammer 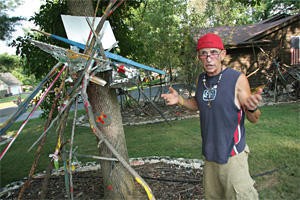 Lewis Greenberg says his front-yard art project is his way of fighting anti-Semitism.
Back in 2004, Lewis Greenberg embarked on a ambitious project to honor the 60th anniversary of the liberation of Auschwitz. To commemorate the Holocaust, Greenberg assembled a sprawling art installation that eventually covered his front yard in Ballwin.

To the consternation of his neighbors, Greenberg, 66, arranged clusters of pointed wooden sticks and constructed a six-foot Star of David. He didn't stop there. He then hung aluminum globes from tree branches, draped an Israeli flag across his front door, and laid mosaics of granite and marble on the front walk..

His neighbors in the Whispering Oakwood subdivison called Greenberg's Holocaust Revisted an eye sore and argued that it lowered their property values. The whole thing led to nearly three years of court battles between Greenberg and the City of Ballwin. Last October, he was convicted of littering and storing hazardous materials and was ordered to clean up the property -- or else.

Or else happened Monday.

Judge Lawrence Permuter sentenced the retired art teacher to 20 days in jail and a $1,000 fine after he refusied to make any changes to his front-yard exhibit.

Greenberg's attorney, David Howard, based his case on the his contention that Greenberg's art is no different than a holiday display, or even a birdbath, and that Ballwin's demand that it be removed violates Greenberg's constitutional right to free speech.

Howard said Greenberg will appeal and the judge set bail at $10,000.

Ballwin city prosecutor Keith Cheung said the 20-day sentence does necessarily mean Greenberg's Holocaust Revisted will be changed, and that the city will have to decide how to proceed.

As he told the Post-Dispatch: "There is only so much we can do. We can't take a bulldozer to the property."