Baseball nicknames. They don't make 'em like they useta. So Unreal has set out to assign a nickname to every Cardinal on this season's roster.

We got started last week with Rick Ankiel. Now it's Joe Mather's turn.

After the jump, Joe Mather...

Our friends at Viva El Birdos have embraced a nickname Joe picked up down in Double A in Springfield. They call him "Joey Bombs."

With all due respect, Unreal thinks we can do better.

May we suggest the alliterative "Wouldn't You Really Rather" Mather?

How's about "Spud" -- a reference to Mather's home state of Idaho?

How about "The Beav" -- a nod to the similarity of Mather's name to that of the immortal Jerry Mathers, star of the classic small-screen series Leave It to Beaver? (And who who grudgingly submitted to an Unreal interview a few years back.) 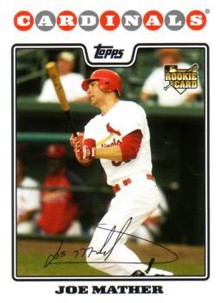 
One vote per reader, please. But don't hesitate to write in a suggestion and leave it via the Comments thread. We'll close voting and announce the winning nickname a week from today, when we put up a new poll.