Police Discover 35 Meth Labs in One Home In Franklin County 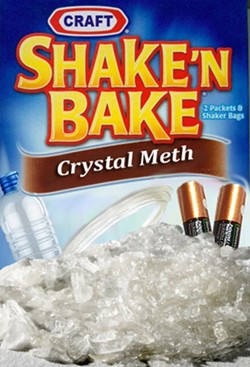 Image source
Neither delicious nor nutritious
Ok, "meth lab" might be a bit of a misnomer in this case.

The tweaker in question was using the "shake and bake" recipe for cooking the drug. The Franklin County Narcotics Enforcement Unit reportedly found at least 35 plastic bottles containing residue from the extremely toxic, potentially flammable process strewn around his house in Union, Missouri.

Not familiar with shake and bake?

Here's a quick primer on the process, which law enforcement says is quickly becoming the method of choice for meth manufacturers across the Midwest because it requires a smaller amount of pseudoephedrine and takes less time to complete than other methods.

And here's an excerpt from the RFT's feature story published in May that details shake and bake and the astonishing number of burn victims who are overwhelming local hospitals:

Missouri law-enforcement officials say they first encountered shake and bake about two years ago. The most popular meth-cooking method (then and now) involves anhydrous ammonia. That mode of manufacture requires several hours, not to mention a heat source such as a stovetop or a blowtorch, an improvised home-chemistry set of glass jars and plastic tubing, and, most essentially, multiple packets of medicine containing pseudoephedrine.

Shake and bake yields smaller (though equally pure) quantities of meth with fewer pills and takes less than 40 minutes from start to finish. The formula is widely available online.

According to Fox 2, the prolific meth cook from Union simply didn't clean up the remnants of the process.

"They were hidden all over the rest of the house," tells Franklin County Narcotics Enforcement Unit Commander Jason Grellner, "in the laundry room they were under the stair case they were in the living quarters in the bedroom."

"They can't figure out why the lung conditions are not getting any better," tells Grellner, "and low and behold it's because their son and her girlfriend are manufacturing meth in the basement of their home."

If police count each bottle separately, Missouri has to be a lock to repeat (for the fourth consecutive year) as the leader of meth labs seized in the country. Even without an extra 35 meth labs the Show-Me State is already in the lead.