The Girls Guide to the Galaxy Party at the Royale

You might assume that a manly man, like myself, wouldn't have a lot of interest in a blog titled "The Girls Guide to the Galaxy" especially if it's all wrapped up in a cute pink and black design. Well you'd be right. I normally wouldn't read such a blog. Why would I? It's obviously not FOR me. But I have to confess. I do take a peek at it from time to time. I'm curious what the girls are up to.

The Girls Guide to the Galaxy is a good example of the way web content and the media in general is splintering and becoming more focused on niche markets, sometimes micro-niche markets. In the case of the Girls Guide, the focus is on young adult women who aren't parents yet. Sort of an anti-mommy blog.

Photo by Holly McCraig
Melody Meiners
Last week the Girls Guide to the Galaxy threw a party at the Royale to promote their relaunch into a bigger better blog with multiple contributors and to raise some money for charity. I was only able to stop by for a little while early in the evening and things were already well underway with all the GGG contributors getting ready to party down with their readership.

Later I was able to catch up later with founder and managing editor Melody Meiners for this little email Q&A:

What is your personal background?
I am a writing and techy cyborg. I have been writing in some way, shape or form since middle school and have a couple of degrees in English and Communication. I also have a pretty solid IT background. Mix those together and add a dash of nosiness and a big mouth and you have me. 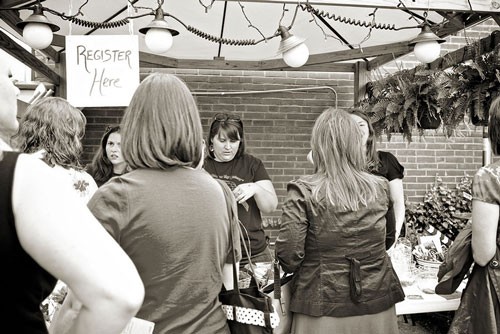 Photo by Holly McCraig
When did you start GGG?
I started Girls Guide in 2006; the original idea was that I wanted to have all of my friends writing about things they were interested in. I asked around and no one was really interested in writing for the site (blogging was, and still arguably is, a bad word for a lot of writers and people in general).  I moved over to News-Bitch as a personal blog and wrote on there for a while. After about 3 years of blogging I started meeting a whole bunch of witty women who write for the web. When I lost my gig at Toasted Rav, I decided that I had the time and contacts and friends to finally do with the site what I had originally intended.  Here we are today with nine writers and more on the way.

When did you decide to make it into a group blogging effort?
It was really after I lost my job as a writer and producer at ToastedRav.com. When I was writing for them I realized how much I really love writing for the web. There are so many different things you can do with the web in terms of style, voice and media that really aren't possible in traditional publications, and the feedback and interaction that happens with blogging and online writing are irreplaceable. I basically thought that since I love writing for the web so much, why not take the opportunity to make Girls Guide what I had intended it to be in the first place.

I also think that the timing is right because while there are a million sites, blogs and communities targeted at mothers, but not all women are mothers and, by that same token, all mothers are women. I just wanted to see a space online where you can read about culture from a women's perspective without having to wade through toilet-training and diaper ads. Not that there is anything wrong with that; I just wanted to see something different.

What are your goals?
The intent of the site is to continue to provide fun, witty and useful content for St. Louis women while giving back to the community with monthly charitable and networking events.

Photo by Holly McCraig
How did the party go?
I'm kinda partial to the way it turned out.  There was a great turn out, everyone seemed to have a damn skippy time and we raised quite a bit of money for the crisis shelter. We can't wait to have another!