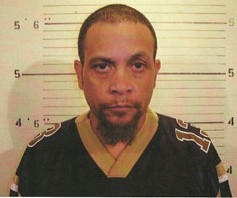 Cedric Pollard
Police are searching for Cedric C. Pollard, 50, a homeless man suspected of the aggravated criminal sexual abuse of a girl younger than 10.

According to the police, Pollard was visiting relatives in the 1700 block of Barbary Way in Swansea, Illinois, about 7 p.m. last night. A young girl who is neither related to the family nor to Pollard was also visiting.

Pollard allegedly touched this girl inappropriately, an act that was witnessed by another child. The kids then reported what happened to the adults, who confronted Pollard and attempted to restrain him for the police. Pollard was able to break free and made a run for it.

Police describe Pollard as a black male, 5'5" tall and weighing 150 pounds. He was last seen wearing blue shorts and a black tank top. Anyone with information on his whereabouts is asked to call the Swansea Police Department at 618-233-8114.