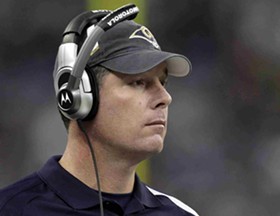 Pat Shurmur is expected to be named the Cleveland Browns' next head coach in the very near future.
The announcement is expected to come sometime today that Pat Shurmur, current Rams' offensive coordinator and former Most Hated Man in St. Louis, will be the new coach of the Cleveland Browns. (He got bumped to former Most Hated because apparently everyone has now decided Steve Spagnuolo is a controlling nutjob and terrible coach because a six-win improvement in one season is grounds for firing and he didn't get along with the equipment manager.)

Seeing as how it appears to be pretty much a done deal already in Cleveland, the more pressing question becomes who the Rams will go to next in filling their OC opening.
The two names at the top of the (mostly speculative) list to this point have been a pair of former head coaches: Brad Childress, recently of the Minnesota Vikings, and Josh McDaniels, the man who was fired from his post leading the Denver Broncos immediately after said Broncos were beaten by the Rams.
Whatever the outcome, I don't see Shurmur's departure sounding any sort of death knell for the Rams and their developing offense. He seemed to do a nice job working with a rookie quarterback this year, but it isn't as if Shurmur is some sort of Mike Martz-like offensive genius. The lack of creativity by the Rams on offense this year had more to do with inexperience and a lack of talent on the field than it did a coaching preference, but even given better talent, Shurmur's offense isn't going to be the reincarnation of the Greatest Show on Turf.

Personally, I'm hoping to see McDaniels come here. He bugged the hell out of me as the Broncos head coach because he seemed too arrogant to realize his players were the ones who would actually have to run his plays, instead trying to immediately go to Bill Belichick's My Way or The Highway method of team construction. As an offensive coordinator, though, you have to admire the scheme that made the 2007 Patriots one of the most dynamic offenses in the history of the NFL.
I also like the notion of McDaniels coming here because it feels vaguely like an anime character arc to me, in which a vanquished warrior immediately swears undying fealty to the victor and helps them learn how to punch a hole in the moon or something. (And yes, I would appreciate it if you would refrain from disabusing me of my notions on how the world actually works. Reality and I have a difficult relationship.)
​
click to enlarge 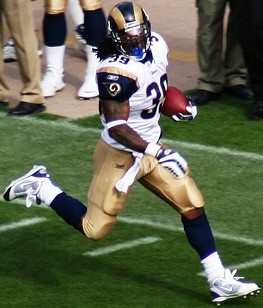 commons.wikimedia.org
Steven Jackson was reportedly unhappy with being underused in the Rams' loss to the Seahawks. Could a new coordinator spell the end of such inexplicable Mike Martz moments?
​There are concerns, of course; chief among them being the lack of continuity for Sam Bradford. And I understand that concern. The old wisdom in the NFL holds that learning a playbook is a bit like learning a foreign language; asking your young QB to learn his second foreign language in two years could very well set back his development, not to mention the rest of the players on the offensive side of the ball. Since the end of the Rams' season, Bradford has been heard to say how excited he is about next year, as he feels like he's finally fully grasped the current offensive scheme. Do the Rams really want to risk destroying that?
The answer, I'm certain, is no. I'm sure they would prefer to keep a similar system in place, which is why the reports that Brad Childress is a longshot to replace Shurmur are so surprising to me. He and McDaniels both feuded with players and quarterbacks in their most recent coaching positions, so it isn't as if one has a sterling record and the other is a team-killer. Given similar profiles of failure, one would think the Rams might be inclined to go with the coach whose scheme presented less chance of disruption.
On the other hand, perhaps the Rams have decided they want to try and bring in a system which makes more full use of the personnel they have on hand. Bradford's most notable physical quality is his accuracy on vertical routes, and McDaniels's offensive playbook contains more downfield routes than most iterations of the West Coast offense are likely to have. Maybe the Rams have decided that if Sam is going to be compared to Tom Brady they should give him Brady's old coordinator.

And as for those who want to throw Alex Smith into the argument as a player undone by constant system changes, I would argue Alex Smith is more undone because he plays like, well, Alex Smith. He was a system quarterback made into the next big thing before we saw all the other spread system QBs fail.
In the end, I base my preference for McDaniels over Childress strictly on which coach I consider to be the more creative, dynamic playcaller. Even if there is an adjustment period for Bradford and the rest of the Rams' offense, I think over whatever period of time the next OC is here in St. Louis, a better scheme will ultimately win out over a more familiar scheme.
© 2022 Riverfront Times