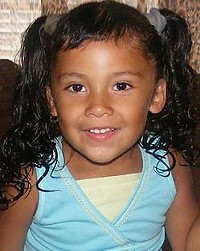 Breeann: Missing since Saturday.
Authorities believe they've discovered the training wheels from a bicycle belonging to a missing three-year-old in the Missouri Bootheel.

Breeann Rodriguez was riding her bike near here home in Senath, Missouri, on Saturday when she disappeared. The wheels were found in an area with heavy brush located approximately two miles southeast of Breeann's home.

Meanwhile, police continue to search for the a mysterious van (image below) seen near the home in the days prior to her disappearance.

Authorities are searching for an older white van similar to these with a possible ladder on the back doors.
Anyone with information into Breeann's whereabouts is urged to call CrimeStoppers at 866-371-TIPS.