The baseball awards season is in full swing now, with Rookie of the Year just having been announced (and by the way, Andrew Bailey, who won ROY in the AL, wasn't even the best rookie on his own fucking team), and Cy Young and MVP coming in the very near future. It's always interesting each year to look at who wins the awards, because it gives you a good idea of just how divorced the awards often are from the reality of the game. 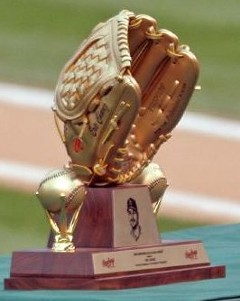 commons.wikimedia.org
Perhaps no award more perfectly embodies this idea than the Gold Glove. Every year, players receive Gold Gloves based on reputation, the occasional highlight reel play, or the quality of their bat. It's exceedingly rare that a Gold Glove winner actually turns out to be the player who is the best defender at his position.

So with that in mind, I thought I might look at this year's Gold Glove winners and see which ones the voters got the rightest, and which they got the wrongest. Oh, and which players should be the most pissed off about being ignored, too.
Cheers
Every once in a while, the voters really do get it right, and I have these award winners to prove it. The two best choices the voters made:
Yadier Molina, C, St. Louis Cardinals
I'll be the first to admit, I haven't always been all that high on Yadi. It's nothing against Molina, you understand, I just happen to belong to that faction of people who believe catcher defense is one of the, if not the, most overrated commodity in baseball. You know why I think that? Because I've based almost my entire philosophy about the game of baseball on listening to and then disagreeing with broadcasters, and those guys loooooove catcher defense. (I'm about half joking on this.)
I will say this for Molina, though: he's probably the only catcher in the game capable of having a real effect on the opposition in the field. No other catcher in baseball both shuts down the opponents' running game so completely and actually manages to generate outs with his glove. And that, to me, is the key why Molina is such a special player: the real reason I think catcher defense is so wildly overrated is catchers do virtually nothing to help create outs. Molina, on the other hand, actively helps create outs with his arm. No other catcher does that to anywhere near the degree Yadi does. He's a weapon without any real comparable in the game right now, and he deserves all the defensive credit and awards he'll ever get.
Evan Longoria, 3B, Tampa Bay Rays
Everybody knows Evan Longoria is a remarkably good young player. Most of the credit he gets, though, is for his work with the bat. What isn't quite as well known amongst the general public is the fact that, as good as his bat is, his glove just might be even more impressive.
According to UZR (Ultimate Zone Rating), Longoria was worth 18.5 runs over an average fielder in 2009. That's nearly two full wins worth of value added just with the glove. And just so no one will say I'm basing my evaluation of his abilities on just one season's worth of data, Longoria's 2008 numbers are remarkably similar. He saved 14.9 runs over average in '08, and did so in just 118 games. Taken together, that gives us over 2300 innings worth of defense solidly in the 1.5-2.0 win value range. John Dewan's plus/minus system (found over at Bill James Online), puts Longoria in almost the exact same range, having him at +21 plays for 16 runs of value in 2009.
You know that game everybody plays at some point in time, where you get to choose one or two players to start a brand new baseball team? Well, when I play, my first choice is Albert Pujols, followed immediately by Evan Longoria. Just saying, is all.