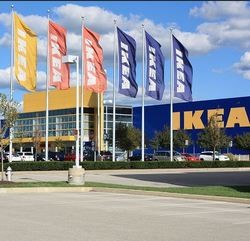 Earlier this week, to the glee of St. Louis' furniture and meatball enthusiasts, construction crews began clearing the site where the 380,000-square-foot store will open in Fall 2015.

Though we're still sore that IKEA chose Kansas City over St. Louis in 2012, spokesman Joseph Roth says the company wasn't ignoring the region's rabid enthusiasm for the store. It has just taken this long for the pieces to fall into place.

See also: Sorry, St. Louis, Those I-K-E-A Letters Were A Total Fake Out

"We actually wanted this for years, too," Roth explains. "We're very particular about our time frames and about our locations, and for a very developed market like St. Louis there was very few options. We chose to take our time and do it right."

Doing it right took ten years of searching and two dozen other possible locations, but IKEA eventually settled on the 21-acre site it purchased from the Cortex district for $30 million. The deal was completed sometime in mid-May, reports St. Louis Business Journal.

IKEA
A map of the future IKEA site.

See also: IKEA is Coming: 5 Businesses St. Louis Will Freak Out Over Next

Roth says local construction firm S.M. Wilson will be demolishing a few small buildings on the site before the official groundbreaking ceremony on June 24. Workers will also need to relocate a major sewer pipe and closing off Duncan Avenue.

In case you missed it, here's IKEA's full announcement from December.