Let's not forget the east side.

After the 1917 race riots in East St. Louis, the NAACP sent W.E.B. DuBois out here to report on the state of the city. This is what he found:

"Yesterday I rode in East St. Louis. It is the kind of place one quickly recognizes, -- tireless and with no restful green of verdure; hard and uneven of street; crude, cold, and even hateful of aspect; conventional, of course, in its business quarter, but quickly beyond one sees the ruts and the hollows, the stench of ill-tamed sewerage, unguarded railroad crossings, saloons outnumbering churches and churches catering to saloons; homes impudently 'wide open,' shamless and frank; great factories pouring out stench, filth, and flame - these and all other things so familiar in the world market places, where industry triumphs over thought and products overwhelm men." (from "Of Work and Wealth")

But if you go further back in time, the east bank of the Mississippi wasn't so bad. Or so Kate Chopin imagined in her short story "The Maid of Saint Philippe", which took place in an eighteenth-century town not far from present-day Prairie du Rocher:

"Less than a score of houses formed the village of Saint Philippe, and they differed in no wise from one another except in the matter of an additional room when the prosperity of the owner admitted such. All were of upright logs, standing firmly in the ground, or rising from a low foundation of stone, with two or more clustering rooms round a central chimney. Before each was an inviting porch, topped by the projection of a shingled roof." 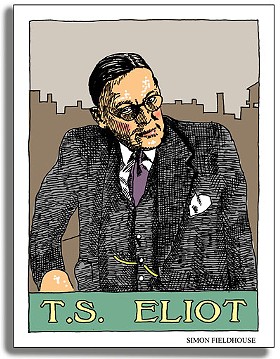 And now a word about the river itself from T.S. Eliot:

"I do not know much about gods; but I think that the river Is a strong brown god - sullen, untamed and intractable, Useful, untrustworthy, as a conveyer of commerce; Then only a problem confronting the builder of bridges. The problem once solved, the brown god is almost forgotten By the dwellers in cities - ever, however, implacable, Keeping his seasons and rages, destroyer, reminder Of what men choose to forget. Unhonoured, unpropitiated By worshippers of the machine, but waiting, watching and waiting. His rhythm was present in the nursery bedroom, In the rank ailanthus of the April dooryard, In the smell of grapes on the autumn table, And the evening circle in the winter gaslight." (from "The Dry Salvages", Four Quartets)