Bryan Sutter
St. Louis ranked No. 9 for the percentage of the working population in arts, entertainment and recreation.

St. Louis' love for music and abundance of art-supply stores earned the city a No. 4 ranking on a list of the most creative cities in America.

San Francisco tops the list of most creative cities, published by the rankings-happy real estate blog Movoto. St. Louis ranks between No. 2 Orlando and Portland (tied) and No. 5 Atlanta.

"Given that this Missouri city has such a strong tie to music (come on, even its hockey team is called The Blues) it makes total sense that the locals would embrace creativity," according to Movoto. "There were a ton of music instructors and stores, the third most art supply stores, and even the 11th most performing arts."

Indeed, the first owner of the St. Louis Blues, Sid Saloman, Jr., was inspired to name the hockey team after blues music by W.C. Handy, known as the father of the blues, who wrote the popular song "St. Louis Blues" in 1914. "The name of the team has to be the Blues," Salomon said after launching the Blues in 1967, according to the team. "It's part of the city where W.C. handy composed his famed song while thinking of his girl one morning.... No matter where you go in town there's singing, that's the spirit of St. Louis."

Here's how St. Louis ranked compared to other cities: 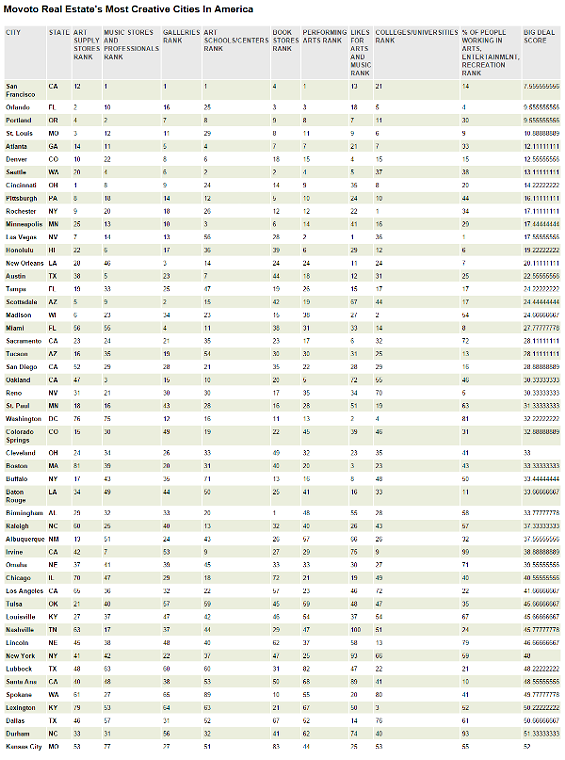