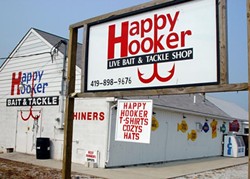 Of course, thinly veiled prostitution ads on the site are not going away entirely. A new category -- "adult services" -- has been added. Now it costs $10 to add a listing (the proceeds of which go toward various missing/exploited children agencies) and it's someone's full-time job to read the listings and decide whether they are too blatant in advertising their wares. (What a job, eh?)
There's already been a ton keystrokes wasted discussing what impact this development will have on the world of online prostitution, and yet there's one group (and really, it's the only group that matters in regard to this issue) whose voice hasn't been heard. I'm talking about the people who actually use this service: prostitutes and their patrons.
Craigslist may be the most popular and visible online prostitution site but it is hardly the only one. Skimming the message boards at two popular "erotic services" sites -- one local, one national -- it's obvious that the Craigslist developments are a hot-button issue.
(It's also glaringly obvious that sex will continue to be bought and sold in cyberspace no matter happens with CL.)
Read a few choice comments from these discussions after the jump.
Nationally, there are dozens of popular sites that clearly specialize in facilitating the buying and selling of sex. They range from the super-seedy (see The Erotic Review and its felonious founder David Elms) to the slightly less seedy. Here, we have comments from BigDoggie.net, which is perhaps most famous for issuing a daily top 100 ranking of the most highly rated escorts on their site.
There were at least four different threads devoted to Craigslist and the opinions ranged from calling site founder Craig Newark "a sheep who caved to the Nazis" to comments along the lines of "yeah, Craigslist was dangerous and got what was coming to it."
Here's one of the latter:

More than a few people pointed out that political grandstanding and vote-grabbing were partially to blame. To wit:

If someone met someone from a newspaper or any other source and they got hurt or even murdered, do you think they would shut down that particular section in a "reputable" paper or site? No. Craigslist has gotten a bad rap and some legislators (and cops) are simply celebrity-happy.

I think CL missed the boat on this one and should've stood up for what is right...free speech and enterprise and let people take care of themselves. -Serenity

More specific to St. Louis is STL ASP, which was the subject of an RFT feature story last June. The site's founder, an escort herself, agreed to be interviewed for that story, which described the site as "tight-knit network of the region's online escorts, providing a forum for them to share knowledge, including concerns about potentially dangerous johns."

The dialogue here was much more civil but still ran the gamut from "this is pointless" to "good riddance." Here's an example of the former:

This is like the steriod witch hunts in baseball...... I mean really???? We have people dying because they can't afford medical treatment - proper food and drink..... We have masses of people hooked on Meth and H - yet we feel the need to throw resources at something like this???.....and they do it under the pretence of "we're stoping sex/human trafficing".

Look I don't doubt that - that shit happens and it's sad when it does and the "people" (if you can call them that) should be dealt with in sever ways.....but IMHO we have WAY MORE SERIOUS issues to deal with...... People are losing their homes - jobs - savings and disturbingly large numbers - yet we focus on the single mom trying to make a living that doesn't include food stamps...... We want to muck with the 20 something who is trying to pay student loans off.

One of the more novel ideas was to rally politicians to pass more favorable legislation. Improbably, but interesting:

Lament all you want, but the law is the law.

If we want to change the law, then we should form a lobbying group, hobbyists and ladies, and head to Jefferson City and Springfield.

We should be very public about who we are, what we want, why it serves society.

That's how everyone works to change laws.

That's how we got riverboat gambling, although the gambling lobby is very rich and powerful.

In this country, with its Puritan roots, anything else is probably going to be Nevada, and only certain counties at that.

Until we are willing to stand up with public faces and ask for support among the voters and their elected representatives, we are just barking in the dark.

This stuff has been around for thousands of years, and it isn't going away.

The conditions may change from time to time, and we can talk hypocrisy all we want, but nothing's really going to change in this country, probably ever.

Of course, this was quickly shot down:

And the site's voice of authority succinctly pointed out the real bottom line:

The internet is not going away, neither are we. -site admin