One Man's Lonely Protest Against the Loop Trolley, or The Further Exploits of Andrew Wool 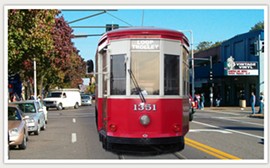 image via
U. City provocateur Andrew Wool's latest plan is to stop the Loop Trolley.

Today at 5 p.m., Joe Edwards will be hosting an open house at the Missouri History Museum in Forest Park to discuss the latest developments in the construction of the Loop Trolley, paid for by a $24 million federal grant and a one-cent sales tax. Andrew Wool will be there hoping to stop him.

Wool realizes his chances aren't that great. Last week, he had grandiose plans of leading a mob to disrupt the proceedings, sort of like his Tigers for Truth campaign in the fall of 2009, when he tried to teach the masses that the "lioness" on the University City Lions' Gate is actually a tiger. (The lesson doesn't seem to have stuck.) He also had hopes of filing a preliminary injunction to halt progress on the trolley.

But as of Monday, when Wool last spoke to Daily RFT, he'd had to scale back considerably.

"Now I think it's going to be me with a sign, giving a prepared speech," he says. "Maybe I'll hand out a leaflet with bullet points. Basically, I'm going to go and be as big a jerk as I can. It sorta comes naturally."

This is, of course, the man who contributed to the 2008 Presidential campaign by selling T-shirts on the streets of U. City that read, "Sarah Palin, putting the 'cunt' back in our country."

But Wool says his protest against the trolley is totally different. "Some things I do to poke fun at people," he admits. "But I actually feel that this is my civic duty. I'm trying to save U. City."

A resident of the Loop, Wool says he has spent some time canvassing the neighborhood and asking residents and visitors alike what they know about the trolley.

"People think it's going to be free," he says. "It's not. People think it's going to be a bus that just looks like a trolley, but they'll really be ripping up St. Louis streets to put down tracks. Do you know how loud a trolley is? It's a friggin' train. It's thousands of pounds of metal, and when it screeches, it's loud. The Loop won't be the most pleasant place to have a glass of wine."

Wool believes that the stretch of Delmar between Skinker and the Lion/Tiger Gate isn't wide enough to handle both trolley and regular traffic. He notes that the sidewalks have been expanded since the street last had a trolley, and that traffic gets clogged even when there's just a delivery truck parked on the side of the street.

"Who do you sue when the trolley hits your car?" he asks. "Who's in charge?"

He's also concerned that the trolley will cut down on foot traffic in the Loop, which could ultimately hurt small businesses. "Blueberry Hill and the chains can weather it," he says, "but the smaller places, like Meshuggah [Coffeehouse] and Subterranean [Books], can't."

Wool tried, unsuccessfully, to get in touch with the Department of Transportation, which gave Edwards the $24 million grant that will cover the trolley's start-up costs. "It was harder than I thought," he says. "I don't know who to contact."

Nonetheless, Wool says he will persevere, for the sake of U. City. "This municipality is about people, and schools, and the community," he declares. "It's not about how many hamburgers it sells. This trolley will be like Joe Edwards' albatross: It will cancel out all the good he's done."