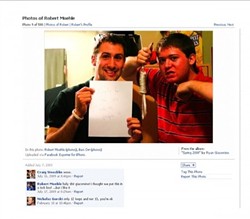 In early voting on Friday it seemed that O'Fallon softball coach Craig Benoist -- accused of sodomizing one of his 15-year-old players -- would run away with the competition. But sometime over the weekend Moehle and Orr charged ahead, finishing with 52 percent of the vote compared to Benoist's 34 percent.

The SLU duo was forced to resign from the school's student council when Facebook photos emerged of the two white undergraduates holding a noose and sign saying, "Only for use on white people!"