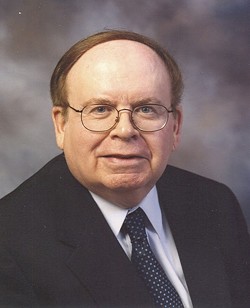 Mayor Robert Lowery
Update: In a statement emailed to Daily RFT yesterday, Mayor Robert Lowery calls the complaints filed against him and Florissant a "ridiculous lawsuit" that will "cost the city thousands of dollars to defend." Additional response from the mayor incorporated into this updated post.

This past November, Christine BredenKoetter placed a small sign in the front lawn of her Florissant home announcing that her husband, Andrew Podleski, was running for mayor in April.

A few days later, a letter arrived in the mail from Florissant's building commissioner, Phillip Lum, informing the couple that they were in violation of city law for posting a political sign more than 30 days prior to an election. Failure to remove the sign within ten days, the letter warned, would result in removal of the sign by the city and possible additional action.

Further review of City Code 520.020 found that incumbent Mayor Robert Lowery has last call in determining which political yard signs stays or goes. "Any political sign erected contrary to the provisions of this Section may be immediately removed at the direction of the Mayor of the City of Florissant," the law reads.

To BredenKoetter the law smacked of an effort to squelch her Constitutional right to free speech. The ACLU of Eastern Missouri agrees. This past Monday the ACLU filed suit on behalf of BredenKoetter in federal court on claims that Florissant's ordinance violates the First and Fourteenth Amendments ensuring free speech and due process.

"The ordinance discriminates against signs bearing political speech by placing time, durational, size and numerical limitations that are more restrictive than those for signs containing non-political speech," the lawsuit states. "The ordinance also discriminates by allowing the mayor unbridled discretion to remove political yard signs -- but not any other type of sign -- without any due process or recourse."

Five days after placing this sign in her yard, Christine BredenKoetter was told to take it down.
In addition to suing the city, the suit also names Mayor Lowery and building commissioner Lum as defendants.

Lowery, meanwhile, contends that the Podleski, who serves as a Florissant councilman, could have addressed his concerns about the law with his colleagues on the board instead of having his wife file a lawsuit against the city.

"In my opinion, it is outrageous for a legislator to challenge the constitutionality of his own ordinances through litigation when the problem should have been addressed through the normal legislative process of sponsoring a Bill to address the problem," said Lowery in a statement. "Council member Podleski should have done his job rather than playing politics and wasting tax dollars by forcing the city to defend a ridiculous lawsuit."

It's unclear when the section of city code allowing the mayor to remove political signs at his discretion was added to the code. The ordinance -- which covers everything from "For Sale" signs to church marquees -- has been amended seven times since 1990 and twice since Lowery took office in 2001, after he served 22 years as Florissant's police chief.

Recently the 72-year-old Lowery has been criticized  for the way he's allowed to call the shots in his north county suburb which, unlike most municipalities, also allows the mayor to serve as city manager.

Last year the Post-Dispatch investigated allegations that Lowery forced city employees to campaign for him, worked irregular hours (often arriving at City Hall late in the afternoon), and waived city fees for groups and people he favored.

As it turns out, Christine BredenKoetter and her husband, Andrew Podleski, may not have to worry about the law for too much longer. That's especially true if Podleski wins his race for mayor, which suddenly got a whole lot easier last month when Lowery abruptly announced he would no longer seek re-election.

"I love this city, but I'm tired of politics; I think they're evil and disgusting," Lowery told the Post-Dispatch in a December 17 interview that began with a discussion about his re-election effort but quickly turned ugly when the paper again asked him about allegations that in past elections he required city workers to campaign for him. 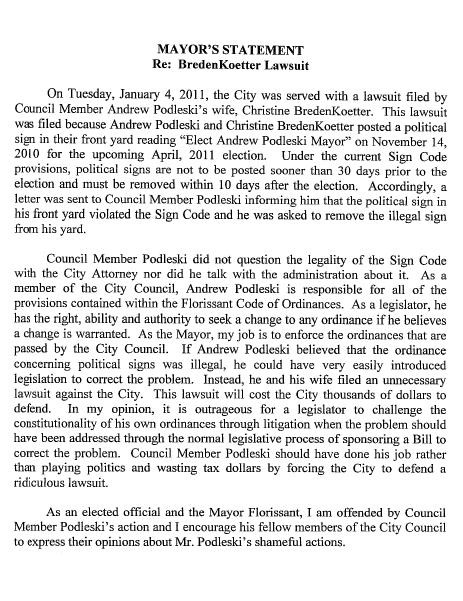