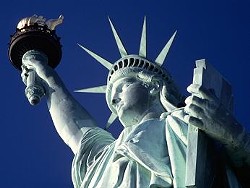 Give us your tired, your hungry, your poor; we'll drug test them!!
The third time proved to be the charm.

After floating bills the previous two years (Exhibit A, Exhibit B) that would allow officials to drug test federal welfare recipients in Missouri, lawmakers in Jefferson City finally got enough votes to send the legislation to the governor.

And they did so in convincing fashion. This year's bill -- sponsored by Rep. Ellen Bransom (R - Sikeston) -- cleared the House and Senate with a veto-proof majority. The bill actually grew more onerous once it made its way to the Senate with legislators there increasing from one to three years the penalty for welfare recipients who test positive for drugs.

As the law currently reads, participants in the Temporary Assistance for Needy Families found to be on drugs will still be eligible for benefits if they enter drug treatment. Should they test positive for drugs again, they'd lose welfare assistance for three years. It's up to the Department of Social Services to determine whom to screen and how to test them. The testing could cost the state $1 million a year. There are about 29,000 Missouri adults who participate in the program.

Critics contend that the bill would unfairly harm the children of welfare recipients, but backers of the bill say dependents could still get aid through third-party participants.