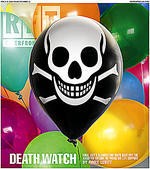 Our feature story this week, "Death Watch," is a must-read for anyone who has wondered about assisted suicide, the changing ways in which it is practiced, and the ethical and moral questions it raises.

This engrossing story by RFT writer Aimee Levitt focuses on the Final Exit Network, a radical offshoot of the now-defunct Hemlock Society who have chosen helium as its preferred agent of death and total secrecy as its modus operandi. As Levitt skillfully chronicles, the group's uncoventional protocols and its clandestine behavior have put the assisted-suicide network on life support.

This week's News Real, "Sowing Pains," by Kristen Hinman, details how and why plans to expand Bowood Farms' nursery is creating widespread discontent in the Central West End, pitting some peeved preservationists against the farm's owner, John McPheeters.

RFT film critic Dennis Brown, meanwhile, offers up a first-rate review of The Ugly One, "a wickedly probing satire," now being performed at Theatre 134 at the ArtSpace at Crestwood Court.

Turning to music, former RFT writer Randall Roberts -- now music editor at one of our sister papers, the Los Angeles Weekly -- tells us about Will Oldham's warm and fuzzy return to The Pageant on Friday as Bonnie "Prince Billy."