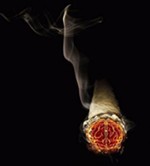 Yesterday here at The Daily RFT, Chad wondered if or when the mayors of Olivette, Creve Coeur, Overland and University City would quit huffing and puffing about smoking bans and finally push 'em on through in their respective municipalities, now that Clayton is on the verge of enacting its own prohibition on indoor smoking.

I talked to the mayors and council people of nearly all those cities for this week's cover story, "Butt Heads."

Besides sharing their thoughts on a smoking ban (be it state-wide, region-wide, county-wide, or muni by muni), the elected officials were among 145 from the region who told me if they're addicted to nicotine -- or, if they ever were -- not to mention how many packs they smoke a day. Even how they quit -- or tried, and failed, to kick the habit.

Though the subject may make some turn up their nose, many of the public officials' responses are pretty refreshing.

The online story has links on the left-hand side of the page to each of the jurisdictions that I polled. As for the five above-mentioned signees to a resolution urging St. Louis County to pass a ban, here are links to four of them: Clayton, Creve Coeur, Overland, University City.