Should Missouri Subsidize Lead Company That Poisoned Town and Is Owned by Billionaire? 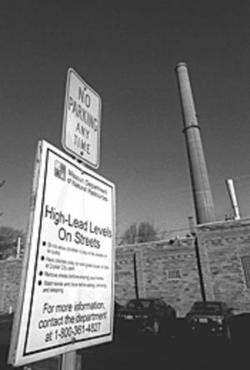 Photo: Jennifer Silverberg
Outside the Doe Run smelter in Herculaneum.
Note: A couple clarifications appear at the end of this article.

On Tuesday, a trial began in St. Louis Circuit Court in which sixteen families from Herculaneum are suing the former owners of the Doe Run smelter on claims that pollution from the facility poisoned them, resulting in depression, asthma, learning disorders and other afflictions.

A day later -- in Jefferson City -- state legislators proposed a plan to provide tax incentives to Doe Run to build a new, low-emission facility in Herculaneum. State Senator Ryan McKenna, a Democrat from the nearby town of Crystal City, said it would "devastate" Herculaneum if the smelter were to relocate somewhere else.

Umm, pardon us, but it seems Doe Run has done a pretty good job devastating Herculaneum on its own.

Drive through the town located along the Mississippi River in Jefferson County, and you'll see vacant lot after vacant lot where homes used to be. Doe Run was required to purchase those properties and demolish them after the soil on which they sat tested dangerously high for lead.

What were residential streets surrounding the Doe Run smelter have given way to green space.
As recently as 2009, the EPA found that one-third of properties situated within a mile of the Doe Run's smelter contained lead at levels exceeding 400 parts per million (ppm) -- the EPA's threshold for removing and replacing such soils.

Last October Doe Run announced it would close its Herculaneum smelter by 2013 instead of trying to bring the facility into regulatory compliance. Based on its repeated citations, Doe Run is now spending $65 million to correct violations of environmental laws at ten of its lead mining, milling and smelting facilities in Missouri.

The record in Peru, where Doe Run operated a mining site in the town of La Oroya, is even worse. That site has been named one of the ten most polluted areas in the world. (The Doe Run Company ceded ownership of La Oroya mine in 2007. The mine now operates independently as Doe Run Peru.)

Then there's this: Doe Run and its Peruvian sister company are currently owned by The Renco Group, a privately held company founded and controlled by New York billionaire Ira Rennert. Forbes recently ranked Rennert as No. 144 on its list of the richest people in the world, estimating him to be worth $5.4 billion. He's also known for building one of the largest private residences in America. His Southhampton home is 110,000 square feet and estimated to be worth $200 million.

So, then, back to the question: Based on their track record, do Doe Run and Ira Rennert really need public subsidies from the state of Missouri?

Clarifications: This article originally stated that the lawsuit in St. Louis Circuit Court involves the Doe Run company. While technically correct. The lawsuit is, in fact, against the three companies that owned Doe Run in 1994 and not the current ownership of the smelter. Those former owners are Fluor Corp.; Doe Run Investment Holding Corp.; and A.T. Massey Coal Co.