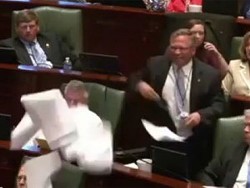 He ain't even dropped the mike yet.
Illinois State Representative Mike Bost (R-Murphysboro) has had it up to here with the House Speaker (Democrat Michael Madigan) and his autocratic control of the legislative process. Maybe you've seen his video? It's the one where he throws paper and screams with equal parts frustration and outrage.

Naturally it's making the internet rounds, which means it's already been remixed. Here's Youtube user NZtrillion's effort, entitled "Rap Battles in Parliament: Illinois State Rep MC Mike Bost vs. the Speaker." I'm not sure a Republican from Murphysboro is down with hip hop, but he should be flattered by the effort.