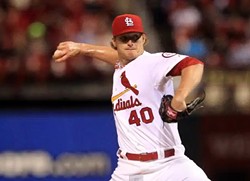 St. Louis may be in baseball withdrawal, but the New York Times put Cardinals pitcher Shelby Miller in the headlines after his Missouri wedding to Amy Peters.

The story starts with a dig at the Cardinals, who left Miller in the bullpen during the 2013 World Series against the Boston Red Sox. Peters -- now Amy Miller -- was there to comfort him when he never got on the mound, according to the 1,400-word story.

"She would remind me that I was good and that there was some reason unknown to us why I wasn't pitching," Miller told the New York Times.

See also: Shelby Miller: Not Helping the Case for Athletes and Twitter 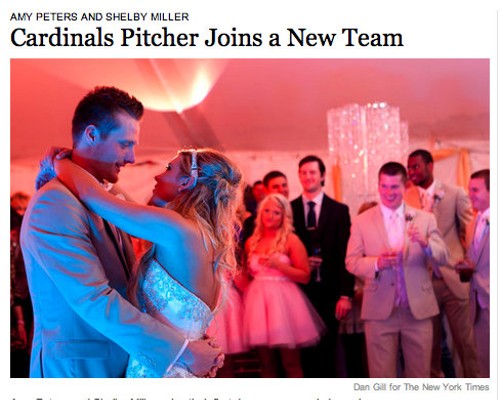 Miller proposed the day after baseball season, on the Jacks Fork River about 190 miles from St. Louis, his new wife posted online. His fiancee-to-be was grasping him so tight as they walked along a candlelit path that Miller had to ask her to let go so he could drop to one knee, according to the couple's wedding site.

The nuptials were a Cardinals affair. Rival pitchers Joe Kelly and Lance Lynn attended, Kelly as a groomsman and Lynn as a guest, according to the New York Times. Cardinals manager Mike Matheny blessed the reception's buffet dinner, and chaplain Rev. Darrin Patrick officiated the ceremony.

The couple married November 16 at the bride's family's resort in Eminence, a Missouri town of about 600.